Set to rival the Porsche Panamera Turbo the new Mercedes-AMG GT 4-Door will cost from £121,350 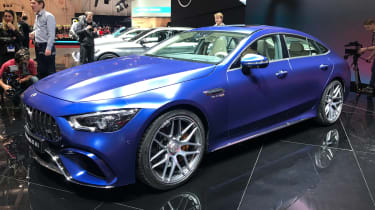 Mercedes-AMG has announced the pricing structure for its V8-engined GT 4-Door models revealed at the Geneva motor show earlier this year with the range-topping GT 63 S 4Matic ‘Edition 1’ model weighing in at £148,950. The less well-equipped GT 63 S model costs from £135,550 while the less powerful GT 63 (non-S version) has a price tag of £121,350. 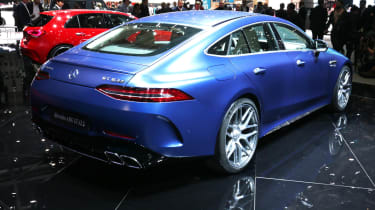 The V8 in the flagship GT63 S is the same M178 4-litre ‘hot-vee’ unit found in the E63 S, although here power has been raised to 630bhp with 664lb ft of torque, resulting in a 0-62mph time of 3.2 seconds and a 196mph top speed. As previously mentioned, power is delivered to the road via the 4Matic+ all-wheel-drive system, which is mated to a nine-speed MCT Speedshift gearbox and also offers a drift mode. 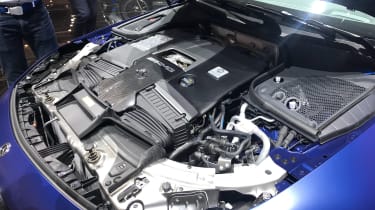 A third model, the GT53, powered by the hybridised in-line-six powertrain from the recently launched AMG CLS53, shares identical figures to the CLS53. Despite its entry-level status, this model supplies plenty of performance – 0-62mph in 4.5 seconds, 177mph at the top end – while the hybrid tech allows it adequate fuel consumption of around 31mpg. The 429bhp and 384lb ft efforts of the petrol engine are bolstered by an ‘EQ boost’ of up to 22bhp and 184lb ft when required. The GT53’s price has yet to be announced.

> Click here for our first drive of the Mercedes-AMG CLS53

All models hover around the two-ton mark, the GT63 S being heaviest at 2045kg (DIN) and the six-cylinder GT53 being the lightest at 1970kg, despite its battery pack and electric motor.

Aesthetically, the front end features the familiar wide grille and low-set headlights of the two-door GT and the slim tail lights also evoke the more compact coupe. As standard there’s an active rear wing, although an optional aero package will replace this with a rather heavy-handed fixed item if you so wish. 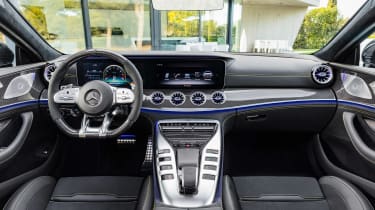 Inside the cabin – which is accessed through coupe-like frameless doors – there’s been a similar transformation in the move to four doors, with a dashboard layout combining elements of both the existing GT and Mercedes’ more conventional models like the E-class.

From the former we get the raised, prominent centre console layout with its clear physical controls and slightly awkward, backward-set gear selector, while the latter has influenced the wide TFT display that stretches from the driver’s instrument panel to the middle of the dashboard, and a set of four central air vents that echo those of the E-class coupe.

And, of course, you get a pair of extra seats in the back, bringing with them an element of practicality as yet unavailable in the GT range. For its exterior styling and interior layout alone, the GT 4-Door is likely to find plenty of fans, but if you were hoping for a more distinctive interior on the lines of the Porsche Panamera’s for your extra cash, you’ll be disappointed. 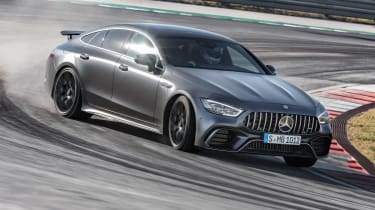 New in the GT 4-Door is the option of a more performance-orientated steering wheel than that of the E63 S. It features a drive mode selection switch, which contains a small, round screen to tell you which mode you’re in. This is matched by the placement of buttons for the sports exhaust and gearbox mode on the other side.