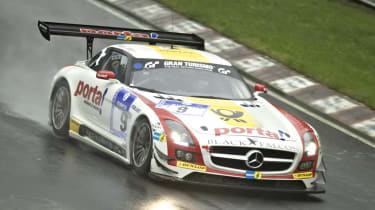 The 2013 Nurburgring 24-hour race was eventful for Mercedes. The German manufacturer picked up its first win at the Ring’s round-the-clock race, while Michael Schumacher thanked his home fans and marked his Formula 1 retirement with a lap of the Nordschleife in his 2011 Mercedes F1 car. A video of his lap – which shows even at something well short of full speed, he catches the other Mercs he’s meant to cross the finish line in tandem with – is below.

The victorious car was a Black Falcon team SLS AMG GT3, while there was a pair of ROWE Racing SLS GT3s in third and fourth place. At the winning car’s helm was Bernd Schneider, Jeroen Bleekemolen, Nicki Thiim and Sean Edwards, who became the first British driver to win the N24.

The 2013 race was a rather eventful one, with heavy rain calling off racing during the night (around 15 hours of racing actually taking place) and causing plenty of drama and excursions off track when things restarted on Monday morning. The SLS was just 2min39sec ahead of the BMW Z4 in second place.

evo’s Richard Meaden raced once again, this year at the wheel of an Aston Martin V12 Vantage. After some ECU problems, it finished fifth in class. Other notable entrants included a McLaren MP4-12C GT3 which didn’t make it past one lap thanks to a mechanical issue and the Kissling Opel Manta which completed another N24; it’s a regular and a true fans’ favourite.