From its 1499cc the entry-level Cooper develops 134bhp at an almost diesel-like 4400rpm, with 162lb ft of torque on tap from only 1400rpm. Those figures are similar (though strangely, not identical) to what you’ll find in the regular Mini Cooper, but given the Countryman weighs over 200kg more than the smaller hatch (245kg, in like-for-like in Cooper form) the engine does have more work to do. It’s a sweet unit though, more refined than its three cylinders would suggest and happy to rev to its red line.

Next up is the 2-litre, four-cylinder turbocharged Cooper S. Power here is 189bhp at 5000rpm, while torque climbs to 207lb ft at 1350rpm. That should suggest a reasonable turn of pace (and the on-paper figures are brisk) but the four isn’t as pleasant to use as the three, feeling strained at higher revs. 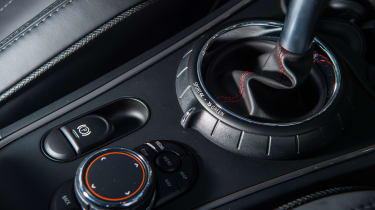 Perhaps better to opt for the more powerful version of this engine, found in the John Cooper Works - here, the 2-litre develops 228bhp at the same 5000rpm with 258lb ft of torque from 1450rpm.

Or one of the diesels. The Cooper D uses a four-cylinder turbocharged unit whose key figures are 148bhp (at 4000rpm) and 243lb ft of torque at 1750rpm.

Trade up to the Cooper SD and the swept capacity remains the same, but power rises to 187bhp at 4000rpm, and torque climbs to a healthy 295lb ft, again at 1750rpm. Those torque figures give the engines a fighting chance of overcoming the Countryman’s bulk, and while the diesels aren’t the most characterful lumps they offer useful performance.