If the Mini Countryman has lost that Mini feel in the way it drives, it’s retained it - at least in spirit - with the cabin. It’s been a while since the large, central circle in the dashboard has housed a speedometer but it’s now a firm Mini design feature, as is a sporty three-spoke steering wheel and a little pod (with a central speedometer, crescent rev counter and LED fuel gauge) behind the wheel.

Prominent chrome switches are littered throughout the cabin, the gear shift lever still has a collar around its base to change the car’s behaviour (one of the most effective, intuitive switches we’ve used for such a system) and an iDrive-style controller in the centre console controls functions on the disappointingly square screen inside that circular dash feature. 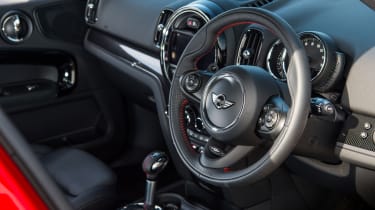 As with other current-generation Minis, the large circle does provide feedback on various functions inside the cabin, lighting up like a jukebox if you change the temperature, the audio volume, switch the driving mode or are simply travelling at a certain speed. Switching driving modes results in a veritable disco in the footwells, too.

Quality is a big step up from the previous Countryman, but so it should be given the prices Mini asks for its crossover these days. In all, a pleasant driving environment, but perhaps too twee for some.