We’re blowing hot and cold on the new Countryman’s shape. From the front it’s an undoubted improvement on the previous model - the squared-off headlights and slimmer grille make the front look wider and less surprised-looking than before. From the front three-quarters it also looks a little more mature, and less barrel-sided than before.

But around the sides it all gets a bit messy, with the impression of blistered arches (but not the squat stance those typically entail), and at the back it’s a rather awkward shape, less distinctive than before and looking more like a regular Mini whose features have been inflated. 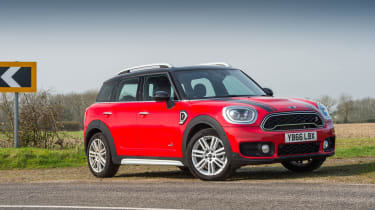 There’s no doubting at all which manufacturer has created the Countryman - and if you’re worried about people mistaking your Mini for anything else there’s still a huge range of personalisation options to drive the point home - but Mini’s products continue to look ever more contrived.

Rival products may also be an acquired taste - we’re thinking of the Toyota C-HR here - but at least designers at other firms have freedom to not base their cars on the design of a city car from 1959...