If you’ve not got over a brand called Mini making larger cars by now you’re probably also one of those tedious sods who still mutter about Marathon being rebranded as Snickers.

However, you’re fully entitled to believe that Minis should at least drive like Minis, even if they’re not particularly mini. And the Countryman... doesn’t. There are vestigial Mini characteristics, but they don’t flow strongly enough through the Countryman’s behaviour to make it feel like even the current-generation Mini hatchback. It’s just a mildly enthusiastic Mini-shaped crossover.

Much of this stems from the steering. Classic Minis were defined by an immediacy and eagerness as soon as you turned the wheel, and it’s a characteristic that BMW managed to carry through to its modern models. It still exists, albeit in a less tactile form, in the current Mini hatchback. In the Countryman, it’s nowhere to be seen - the steering rack itself is quick enough, but the car’s responses have been dulled around the straight ahead. It feels great on the motorway, where the Countryman is stable and refined, but there’s no enthusiasm to the way the Countryman dives into corners and no immediate feedback as you start to turn the wheel.

The steering is also unnervingly light at first, though that improves when Sport mode is selected. You get used to its rate of response and it soon starts to feel a little more natural, allowing you to adopt a flow down the road. 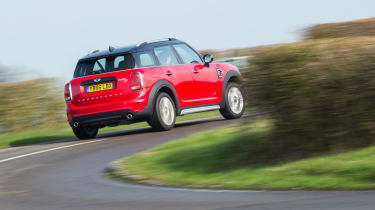 As you learn to trust the front tyres, the decent levels of grip mean you can make rapid progress down a country road. In the Countryman’s credit, the ride is also good - there’s an underlying firmness (definitely a Mini characteristic) but it’s also supple over all but the harshest of bumps. Balance is good, albeit defaulting to understeer, and combined with the all-wheel drive system you can clip along at a good pace. Traction is strong even on slippery surfaces, but there’s one significant element missing: Fun.

Of course, the flip side to this is that the new Countryman should find even more fans among families, as it’s quieter, smoother to drive and simply more grown-up feeling than before. As previously alluded to it’s at its best on the motorway, where the engine fades to a background hum and wind noise is minimal despite the traditional upright windscreen. Here the Countryman feels planted, and visibility is pretty good despite some thick pillars and mirrors that appear to collect dirt and spray quite easily.

We’ve so far experienced the Cooper S Countryman with all-wheel drive and the automatic transmission. It’s probably not the combination we’d choose, mainly thanks to the auto. As with smaller Minis, the gearbox is smooth but detracts from the car’s character, and kickdown results in a flare of revs (and noise) but not a great deal of performance. In fact, the Cooper S never feels particularly quick, perhaps thanks to a kerb weight the wrong side of 1.5 tons. The SD is a little better, and feels well-matched to the automatic.

The all-wheel drive system is even better suited to the car. It has no problem dealing with either 2-litre engine's power, keeping wheelspin to a minimum out of tight corners. There’s not the rear-biased feel of some sportier systems, but it’s effective and should suit the needs of most buyers.

The Mini's brakes aren't ideal either, if you prefer feel and progression over outright power. The Countryman’s brake pedal response is so severe that you invariably slow the car down more than you want for a given corner.