All versions of the Countryman manage to sneak under the 10-second mark for the 0-62mph sprint, so all are capable of reasonable progress given a suitably long stamp on the throttle pedal.

Slowest, despite its apparent traction advantage, is the Cooper ALL4, but what it gains in sending power to an extra pair of wheels it loses in kerb weight - at 1530kg, it’s 90kg heavier than its front-wheel drive counterparts. The result is a 9.8 second 0-62mph time against 9.6sec for the regular Cooper and Cooper automatic. Its three-cylinder engine isn’t unpleasant to use whether you’re cruising or thrashing, with a characterful background thrum. Top speed is 122mph for the ALL4, 124mph for the automatic, and 126mph for the manual.

Next up is the Cooper D, which dispatches 0-62mph in 8.9 seconds and goes on to 129mph. This time, both the automatic and the ALL4 are a tenth quicker over the acceleration benchmark, while the ALL4 is 2mph down on top speed.

The Cooper S ALL4 is next up, and the car we’re most familiar with in the Countryman range. On paper, the figures look strong: 7.5sec to 62mph for the manual, 7.4sec for the auto and 7.3sec for the ALL4. Combine automatic and ALL4 and you shave another tenth off. 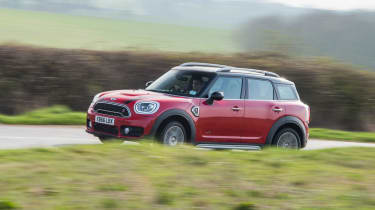 Concerningly though, we’ve driven the Cooper S ALL4 auto and its performance feels rather flat. Traction is good, which helps it off the line, but it never really feels particularly quick once underway. The regular Mini Cooper S hatchback is less than half a tenth quicker on paper, but feels considerably more lively on the road.

The Cooper SD auto is similarly brisk according to the bare figures, at 7.7sec to 62mph. The ALL4 model is three tenths quicker, exhibiting a traction advantage when putting that diesel torque to the tarmac. It still doesn't feel overly brisk, but with some decent mid-range grunt you can maintain a fair pace once you’re up to speed. The eight-speed gearbox means you can keep the revs in the sweet spot easily.

In auto mode, the gearbox makes the most of the engine’s mid range. Even with Sport selected it doesn’t chase the red line, knowing the engine works best between 2500-3500rpm. Take over, using the paddles to change gear, and with every new ratio comes a jolt forward that doesn’t happen in full auto. The changes don’t appear to be any quicker, though. The engine is relatively quiet, but what you do hear isn’t very inspiring. In Sport mode, the sound being pumped into the cabin to mask the diesely engine noise is relatively pleasant.

Quickest of all is the John Cooper Works. Whether manual or automatic (both are all-wheel drive), the JCW scrabbles to 62mph in 6.5sec and tops out at 145mph. Undoubtedly quick for a crossover, but you’ll get more performance (and better handling) for your money in a regular hot hatchback.