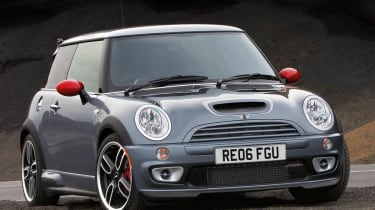 Fans of the Mini Cooper S Works GP rejoice. Mini’s Dr Kay Segler has announced that a GP II will be launched at this year’s Mini United event in May.

Not much is known about the new GP, but it will have a high performance turbocharged engine, with educated guesses putting power at around 220bhp.  The engine is set to be the same 1.6-litre unit found in 181bhp Cooper S and 208bhp John Cooper Works cars; a similar unit also appears in sporty Peugeots and Citroens, and has been cranked up to 256bhp in the DS4 Racing.

It's not yet known whether the new GP will be a two-seater, like its predecessor. It will gain a similarly bold bodykit, though, and a more modern take on the previous GP's four-spoke alloy wheels could be standard-fit. Sharper suspension and lower ride height is likely.

The original, 215bhp GP was built to mark the end of series 1 BMW Mini production in 2006, and was limited to 2000 units. It arrived with a buzz as the most powerful factory-built road Mini, a record only since matched by the Countryman JCW. The GP cost £22,000 when new; with a regular JCW now costing £23K, you can expect GP mk2 to approach £25,000 when it arrives this summer.