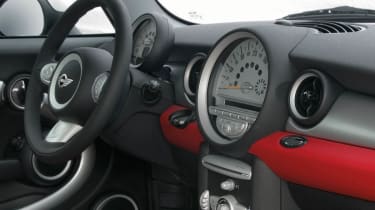 The 1.6-litre petrol engine comes with a twin-scroll turbocharger, direct injection and variable valve control for the first time. The latter is based on BMW’s VALVETRONIC system, adjusting valve lift and opening times in direct relationship to the driver’s throttle demands.

It’s all in the name of efficiency, of course, combining a higher power figure (181bhp is 9bhp up on to the outgoing car’s 172bhp) with lower emissions and fuel consumption (48.7mpg and 136g/km represent improvements of 10 per cent).

Not a whole lot different to before, i.e. really quite good. The engine does feel different, though that comes from someone who went looking for changes; those oblivious to Mini’s improvements may not notice.

Power delivery is a bit smoother than before, the turbo always feeling spooled up and ready to punch you forward. Torque arrives in a linear manner, from usefully low down in the rev range. As we experienced on the launch of the Mini Countryman Cooper S, the engine feels a touch more sophisticated and is cleaner in its power delivery, though at the cost of some character.

The handling is as agile as ever, but in common with the last couple of Minis we’ve driven, this one suffered from marked steering kickback – severe enough to take the overall shine off the driving experience …

Drive it against fresh foes like the Audi A1, Alfa Romeo Mito and Citroen DS3, and the Mini feels an even sharper tool than before, especially with the Sport button pressed. There’s no getting away from how hard it rides, but it’s much more of a drivers’ choice than its contemporaries.

The Renaultsport Clio 200 trumps it in the dynamics department, though - with or without the Cup chassis option, though its 2.0-litre naturally aspirated engine is both less usable and more costly to run than the Mini’s 1.6. Our long-term Clio struggles to top 30mpg and commands £235 a year in tax compared to the Cooper S’s £110. Both have different characters, so try the pair before you buy.

Sub-£18,000 is competitive in the small hot hatch segment, but start ticking near essential boxes (the Chili pack) or those deemed key for resale value (inch bigger wheels, sat nav, funkier paint or leather) and you’ll sail past £20k with ease. An average Mini transaction is £23k apparently.