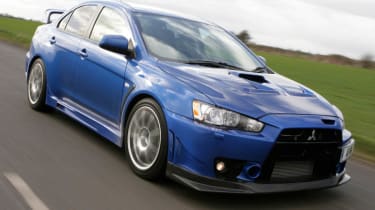 Mitsubishi has upped the ante with its rather bonkers Evo X FQ400. It’s the most powerful officially tuned Lancer Evolution yet released, with 403bhp and 387lb ft topping the previous best, the 400bhp Evo VIII FQ400.

It enables the Evo X to complete the 0-62mph sprint in a sprightly 3.8sec – as quick as most supercars – and onto a 155mph limited top speed.

The extra power is extracted from the same 2-litre MIVEC engine as the rest of the Evolution range, but it gains a significant overhaul to hike the power north of 400bhp. There’s a new, suitably enlarged turbocharger, which gets low-friction bearings, a high temperature turbine and a strengthened thrust bearing. The result is keener response and reduced turbo lag.

There are also motorsport-spec fuel injectors, tweaks to the ECU, an enhanced intercooler (to keep the new turbo in check) and a 3in diameter stainless steel exhaust to allow gases to flow out with less hassle.

There are the usual chassis gizmos, too. Top billing goes to Mitsubishi’s trick four-wheel-drive system (S-AWC), which distributes power to the wheels that’ll use it most effectively. Among S-AWC’s arsenal are stability control, an active centre differential and Sport ABS, while the system can be switched between Tarmac, Gravel and Snow modes.

Outside, there’s tweaked styling and aerodynamics with a heavily vented bonnet, composite side skirts and a restyled rear bumper and carbonfibre diffuser. There’s also the particularly cool sounding ‘Vortex Generator’ on the roof; essentially those protruding carbon bits, that manage airflow that little bit more specifically.

Mitsubishi also popped its SST twin-clutch transmission in the FQ330 this week. Gen-up on that here.