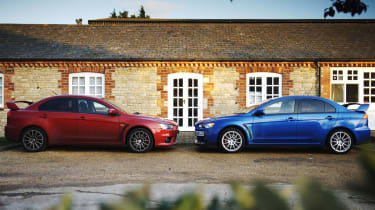 But hang on. Haven’t we spent most of the last six months telling you that the Evo X isn’t as good as it should be? So why the hell are we swapping ours for another? Surely that’d be like having a crap holiday then going back to the same place the next year, only without the excuse that 12 months have elapsed and the bad memories have faded.

Well, let’s pick apart what it is we have against the Evo X. One, it’s not as hardcore and frantic as the IX; two, the engine is as dull as wallpaper paste; and three, the double-clutch gearbox is a bit rubbish. Technical term that. So perhaps the manual-only FQ-360 can address the last two of those faults, and maybe the extra power will also bring back a hint of hardcore.

We can’t say for sure at the moment, because our new Evo arrived with (a very apt) 360 miles on the clock, so for the time being we’re obediently obeying the running-in instructions. One early thought, though: in this day and age fitting a five-speed gearbox to a £35,499 rally special is surely akin to Mr Boeing saying, ‘Jet engines? Pah! Propellers – that’s the future for us.’

Mitsubishi claims that since the five-speed manual is needed for the motorsport versions of the Evo, it wasn’t commercially viable to develop a six-speed one for the road cars, especially as the SST ’box offers six cogs if that’s what you want. This is all very well, but a close-ratio, rally-specific gearbox doesn’t sit easily with Mitsubishi’s claim to have taken the Evo upmarket. Still, let’s not judge it too hastily, even if it does have a long throw and graunches when cold…

Back to our FQ-300. WX08 HHM had covered over 10,000 tough miles before it left us, and apart from our aforementioned reservations and the occasional hum from the dash it was running perfectly sweetly, but with a check-up warning flashing every time the ignition was switched on, it was time for it to get some attention.

It wasn’t all good news, though. While it was up on the ramps the technician let me have a poke around underneath, pointing out how tricky access to the bottom of the engine is (too many separate plastic covers, and a wide variety of different catches, screws, bolts and fasteners). He also took the trouble to show me just how few miles were left in the tyres (already known) and brake pads (more of a surprise as the stoppers still felt great underfoot).

I asked for a quote, and knew from the service manager’s expression that it wasn’t going to be good news. Then a bit of paper landed in front of me with £1371.44 scrawled on it. I asked for a breakdown, although I was busy having one of my own. £744.24 was for four 245/40 R18 Yokohama Advan A13C tyres, while getting the pads done would come in at a frankly astonishing £627.20 – a mere £135 of which would be for labour. I reckon most owners should get at least 15,000 miles from their pads, though – three trackdays and assorted road tests had taken their toll on our car’s.

It’s fuel that’s the real cost of life with the Evo, though. Petrol prices may have dropped recently, but WX08 slurped its way through £3760 of super during its time with us, averaging just 20.3mpg and frustrating everyone with its ability to parch itself in well under 200 miles. Perversely, early indications suggest the manual 360 may prove a touch more parsimonious.

Driving-wise it was hard to tell the difference between pre- and post-service FQ-300, the gearbox still hesitant at low speeds, the engine losing composure above 5800rpm. It was still dynamite around the curves, but when it left Evo Towers for the last time not a tear was shed. The FQ-360 has its work cut out.