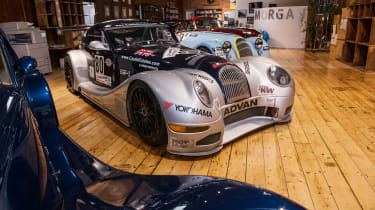 Nick Butler handles details and sub-assembly in the wood shop. And at the moment, he’s handling one of the most recognisable shapes in the whole Morgan factory: The curved wooden elements that form the shape of the rear wings on Morgan’s classic range.

Each has just spent the last two hours in one of Morgan’s oldest pieces of equipment. The hard wooden moulds have been on the same desk since 1952, and bear the scars of decades of hammer marks, glue stains and solvents.

‘The glue should go off in 45 minutes’, explains Nick – but like many processes at the factory, builders on the shop floor have their own idea of what works and what doesn’t. And they’ve discovered that the glue takes a lot longer to set than the glue manufacturer claims. 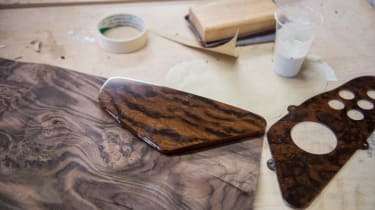 Each shape is formed from three pieces of quarter-inch ash ply. Nick glues them together, then arm-wrestles them into the half-century old wooden mould, and tightens the bolts. Once it’s extracted, the panels are cut to shape, planed and added to the rest of the parts being created around the workshop.

If all goes to plan, anyway. ‘Sometimes they snap’, occasionally in spectacular fashion, explains Nick. The highly-tensioned wooden parts ‘fly all around the workshop’, he says as he gestures their potential trajectories.

Nick is one of several people we speak to who loves the cars as much as they love their job. So is there a Morgan fund in Nick’s future? ‘Not yet… though once my girls have flown the nest I might be tempted. I’d love a new Aero 8…’

Morgan’s trim shop couldn’t be more different from the bustle and noise of the main production line.  The room is bathed in sunlight from large skylights in the roof, and hammers, planes and chisels make way for needles, thread and patinated sewing machines.

Ben Jones is seated at one such machine, sewing up a tonneau cover for one of Morgan’s German dealers. An employee here for twelve years, the upholsterer describes his role as ‘a bit of everything’ – as well as trimming customer cars coming through the workshop, he’s also responsible for trim in development vehicles and concepts.

‘I did the interior on SP1, the new Aero 8 unveiled at Geneva… the Aeromax was the first one I worked on around seven years ago, and I went to Geneva with that car too.’ 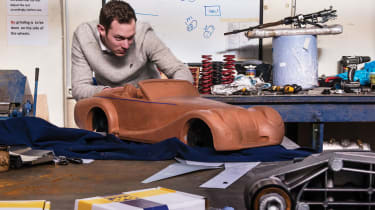 Before Morgan, Ben undertook an engineering apprenticeship, designing injection moulding tools. He then began working for a trim shop, learning skills that would serve him well when a position came up at Morgan.

Surrounded by a spectrum of leather clippings, we talk trim colour choices – and the unusual selections of some customers. ‘I’ve not despised anything as such, but some have been a bit questionable… we did a car for one of our dealers, a pink car with a totally pink interior. Italian customers often go for white leather interiors too, which I can’t imagine ages well!’

Regardless of the colour being sewn, Ben echoes a sentiment we saw over and over again among Morgan’s staff. ‘I love working here’.