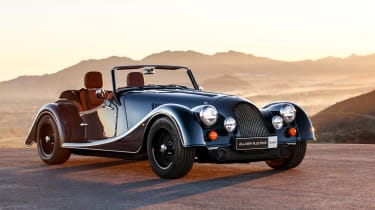 The Morgan Plus Four has been given its most extensive overhaul in the model’s history with a new chassis and engine, while still retaining the car’s traditional and iconic look. The Plus Four – note the new model replaces the numeral 4 with Four – has been the mainstay of the Morgan line-up since its debut 70 years ago and Morgan claims that despite its visual similarity with the old car the new one is 97 per cent new.

It should probably come as no surprise that the Plus Four’s underpinnings are closely related to those of the recently launched Plus Six and as a result it uses a version of the CX-Generation bonded aluminium platform which offers significant structural improvements while weighing in at just 97kg. Despite the passing visual resemblance to the Plus Six, the Plus Four’s body is narrower than its bigger sibling – 78mm overall and 104mm in the central body – yet when compared to the old Plus 4 Morgan says it offers improved accommodation and luggage space.

For the engine and drivetrain Morgan has continued its long association with BMW and the Plus Four features BMW’s B48 2-litre four-cylinder turbocharged motor in the same state of tune as used in the BMW 330i. That equates to 255bhp with up to 295lb ft of torque and, thanks to a featherweight mass of just 1009kg, the Plus Four accelerates from 0 to 62mph in a claimed just 4.8sec before topping out one mph shy of 150. Those are figures for the eight-speed automatic model – yes, that’s right, a Plus Four can be specced with an auto for the first time in its history – but the manual is only slightly slower, recording a 5.2sec time and an identical top speed. If the manual option is chosen torque is capped at 258lb ft.

> Morgan Plus Six review – the British brute with BMW power

While the new Plus Four obliterates the performance on offer from the old Plus 4 (150bhp, 7.5sec, 118mph) Morgan says the new car is more closely comparable with the outgoing Roadster with its V6 Ford-sourced engine. Indeed, the new Plus Four has seen a bit of price hike from the old model and is now more expensive than the old Roadster, too.

As with the engines the transmissions are sourced from BMW’s supply chain so the eight-speed auto features steering-wheel mounted paddles and a Sport mode that is accessed by pushing the gear lever to the left. The manual gains a ratio over the old Plus 4, now being a six-speed unit. As well as offering significantly better performance the switch to BMW powertrains has reaped rewards when it comes to emissions, too. Economy is broadly similar with around 40mpg being claimed but emissions have dropped by over 30 per cent when compared to the previous generation model.

The Plus Four retains plenty of the traditional Morgan design cues but many of these required significant work to the suspension components of the car, particularly the traditional wire wheels. These are a new 15-inch design which called for a redesign of wishbones, suspension uprights and braking components. 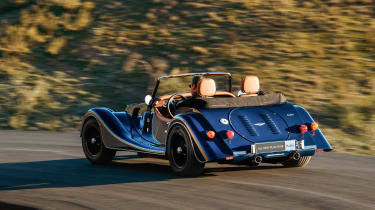 The Plus Four’s interior is a blend of new components already seen on the Plus Six and familiar Morgan design cues. The hand-made ash frame is retained as are the hand-beaten aluminium body panels and hand-trimmed leather. Traditionalists might bemoan the loss of the familiar Morgan steering wheel, its replacement being the same BMW-sourced one as in the Plus Six. The car’s day-to-day usability has also been enhanced by making ingress and egress far better than before.

The Plus Four’s standard equipment list has blossomed and features such as LED front and rear lights, central locking and ABS are now standard along with power steering and a mohair hood. As with all Morgans each one is hand-built to the customer’s specification and the company reckons there are in total one trillion combinations of options available.

The new Plus Four is available to order now with deliveries starting in the second quarter of 2020. Prices start at £62,995.