Performance Car Show at the NEC: the cars in pictures

The LaFerrari and BMW i8 join a whole host of exotic machinery at January's Performance Car Show. Our gallery reveals some of the stars 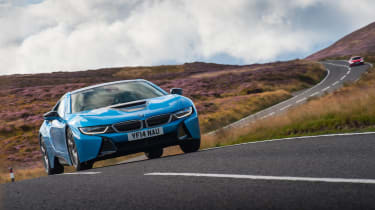 Birmingham will soon be ringing with the sound of several V8s, a flat-six, an in-line five and one very special KERS-enabled V12 as the Performance Car Show arrives at the NEC.

Ferrari’s F40 will spearhead an eclectic collection of cars whose pedigree has been established on Corsica’s back roads, the Sahara, the Nürburgring and even evo’s home circuit, the Bedford Autodrome West Circuit.

The show runs on January 8-11 with static displays and a Live Action Arena where recent evo Car of the Year winner, the Ferrari 458 Speciale, will make a glorious racket alongside Lamborghini’s Huracán, the plug-in hybrid BMW i8 and Vühl’s 05 track car.

If it’s historics that take your fancy there will be rich pickings, too. Porsche’s 959, an Audi Sport Quattro SWB and – holy of holies – a Lancia Stratos Stradale will all make an appearance, as will Jaguar Sport’s oft-overlooked XJR-15. Just 53 were made.

If you haven’t already guessed it, that very special KERS-enabled V12 belongs the LaFerrari, which we imagine will attract by far the most attention within the NEC. Just 499 examples exist, and with 950bhp from a petrol-electric powertrain and a kerb weight of just 1225kg, performance is… lively.

evo’s Dickie Meaden – a man with vast experience of this type of car – recently described the Ferrari’s performance as ‘genuinely shocking’ during a head-to-head with the Enzo in north Wales (evo 203).

Also on show will be is a trio of cars for which most of us would donate various anatomical parts to own just one. They are the latest Porsche 911 GT3, McLaren’s 650S and the Jaguar F-type.

If you stump up £32 for a ticket – £21 for children, free for anyone younger than five years old – come and say hello. evo will have a stand at the show.