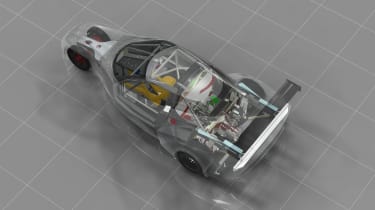 DeltaWing’s Le Mans entry in 2012 was proof of concept for the unusually-designed race car. While the car’s race ended early following a collision, it had until then set impressive pace – and barely scrubbed its lightly-loaded front tyres.

The former aims to demonstrate that the original Le Mans racer’s principles of light weight, a small-capacity engine and uniquely-tailored aerodynamics can translate equally to other series. The latter implies the same is true for road cars.

DeltaWing confirms a few central tenets of its design, which should be similar across both road and racing versions.

One is the ultra-narrow front track in relation to a conventionally-wide rear wheelbase. The engine is located at the rear, and contributes to a large rearward weight bias of 70 per cent. 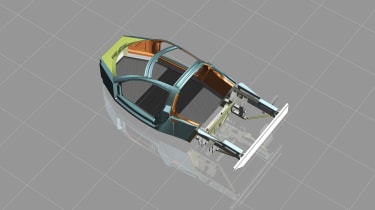 The benefit is lighter load on the front axle, and correspondingly lighter components – steering, braking, suspension and other parts are all less bulky than they’d be in a regular vehicle, yet proportionally strong.

With light weight and a dart-like frontal area, DeltaWing reports some impressive fuel consumotion figures too. Under independent engineering analysis, figures of 88.8mpg on the Environmental Protection Agency (EPA)’s highway cycle and 68mpg combined are predicted.

Those improvements would also translate to greater electric range, if such a powertrain was installed.

Don Panoz, CEO and chairman of DeltaWing Technology Group, calls the result a ‘key milestone’, and a step towards moving forward with the firm’s plans to build two- and four-seat DeltaWing road vehicles.