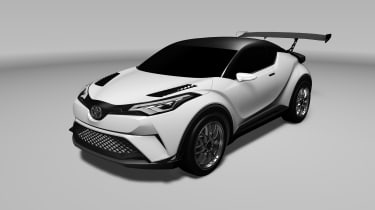 Toyota’s new crossover, dubbed C-HR in concept form, will be the manufacturer’s latest model to race in the Nürburgring 24 Hours.

The C-HR first appeared at the 2014 Paris motor show and more recently at the 2015 Tokyo motor show in concept guise, but Toyota says the race car will be much closer to the final production version.

So far, only a render of the racer has been released, but it’s clear the car’s overall form is very similar to that of the concept – suggesting little will change when the road car is finally unveiled.

While the concept of a race-prepared crossover seems unusual, the race car’s stance doesn’t look quite as gawky as you might expect, thanks to lowered suspension, prominent aerodynamic splitters and skirts and a large rear wing.

In fact, it should fit right in with the Gazoo-prepared Lexus RC and RC F, each of which features similar aerodynamic modifications.

Gazoo’s three-pronged attack will be its tenth visit to the Nurburgring, having first competed in 2007 with the then-new Lexus IS.

‘I remember Gazoo Racing first taking on the challenge of the Nürburgring in 2007 like it was yesterday’ said Akio Toyoda – Gazoo team member but not insignificantly, president and CEO of the whole Toyota Motor Corporation too.

The racing-mad boss describes the Nürburgring 24 Hours as a way to hone both Toyota’s team members and its cars, describing this approach as ‘the real meaning of motorsport’.

This year’s Nürburgring 24 Hours takes place at the famous circuit from May 26-29.