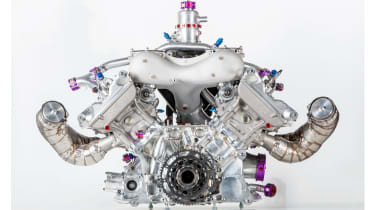 It’s as if Porsche has sensed the slight air of disappointment around its latest road cars. Perhaps not, but it’s a little too convenient that just as grumblings about turbocharged Carreras and four-cylinder Boxsters arise, the company chooses to remind us just what its engineers are capable of.

And so for the first time, Porsche has revealed images of the tiny, jewel-like engine that resides behind the rear bulkhead of its 919 Hybrid LMP1 car and utilises both forced induction and down-sizing.

That this engine - a 2-litre turbocharged V4 - has won in the top class of endurance racing is some achievement. That it has done so when the 919 Hybrid’s closest rivals have rolled out the heavy artillery in the form of a 4-litre V6 turbodiesel (Audi) and a 3.7-litre V8 (Toyota) is even more impressive.

In fact last season Porsche collected the WEC drivers’ and manufacturers’ titles, securing a one-two finish at the Le Mans 24 Hours along the way. So this is a hugely successful engine, and the message from Porsche to everybody who loves sports cars is clear: stop worrying about the future, and buy our cars.

The engine, polished here to within an inch of its life, is part of a powertrain that features an exhaust energy recovery system and lithium-ion batteries that power an electric motor on the front axle. Alexander Hitzinger, the technical director responsible for the 919 Hybrid, describes it as a brave concept that is now paying off. That must be a pneumatic drill to the ears of Ralf Jüttner, his counterpart at Audi. 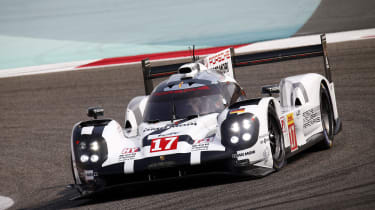 With such sophisticated technology, the link that Porsche so energetically attempts to draw between the 919 Hybrid’s powerplant and that of the 718 Boxster may seem tenuous (one is arranged in a vee while the other is horizontally opposed, for a start), but there are some parallels that stem from the fact that Hitzinger’s team work closely with engineers for the production cars. These parallels are said to concern ‘combustion development’ and ‘fuel-mixture generation’, but beyond these we’re left to draw our own conclusions.

In preparation for the 2016 WEC season, tightened restrictions on the amount of fuel the teams can burn has meant that the V4’s output has officially dropped from ‘more than’ 500bhp to ‘less than’ 500bhp. The full petrol-electric powertrain is still good for around 900bhp, however, so the 919 Hybrid should still be quick enough to put the wind up an F1 car.

The season-opener is the Silverstone 6 Hours on April 17. Other dates to put in your diary are for the Spa-Francorchamps 6 Hours (May 7), the Le Mans 24 Hours (June 18), the Nürburgring 6 Hours (July 24), and the Mexico City 6 Hours (September 3), which will be the first time the WEC has visited the Central American country.

Mercedes-Benz reveals tech offerings of the next S-class, ahead of its launch later this year
Visit/aston-martin/21621/first-ps275m-aston-martin-db5-goldfinger-continuation-model-produced