As Quattro's former head moves into retirement, Lamborghini's chief takes up the reins

Audi has announced that Stephan Winkelmann will be the new CEO of Quattro GmbH, Audi’s performance division, following 11 years at the helm of Lamborghini.

Winkelmann takes over from Heinz Hollerweger, who is retiring after 40 years with Audi and is credited with much of Quattro GmbH’s recent success – as well as bringing electric mobility to the Audi range.

Originally working in acoustics from 1977, he subsequently worked in vehicle inspections, vehicle physics and then vehicle development. During his time working on Audi’s electric mobility projects, he helped develop the R8 e-tron concept, before becoming head of Quattro GmbH in April 2014.

He set up Audi Sport, which covers the R and RS roadgoing models and the Audi Sport accessories collection, as well as looking after the brand’s hugely-successful motorsport activities. 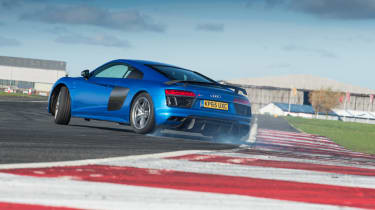 Likewise, Winkelmann has been responsible for much of Lamborghini’s success over the last few years. Last year, the brand achieved a record number of deliveries, at 3245 cars, while an expanding range of models and the successful release of a series of ultra-limited production cars has raised both the firm’s profile and broadened its market.

He’s also been in charge while Lamborghini has developed its important third model series – an SUV. Currently known as the Urus, the car is expected to make its debut in 2018, and could double the company’s existing sales. Winkelmann has previously confirmed the car will use a turbocharged V8.

‘With his experience from more than eleven years in charge of Lamborghini, Stephan Winkelmann will be a key contributor to the further growth of quattro GmbH’ says Rupert Stadler, Chairman of the Board of Management at Audi AG of Winkelmann’s move.