From iconic Imprezas to celeb-owned Maseratis, the CCA March sale has plenty to tempt the evo reader 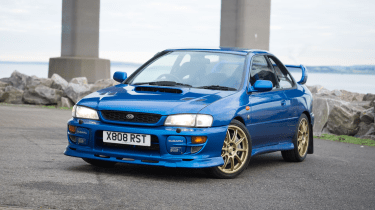 While it’s great to admire the beautiful metal on display at concours auctions like RM Sotheby’s Amelia Island sale, we suspect the average reader (and indeed the average evo writer) has a budget more suited to the Classic Car Auctions (CCA) March sale.

The lot list is like a Who’s Who of the more affordable end of the evo spectrum, with hot hatchbacks, classic luxury barges and a few quirky offerings to get your wallet twitching.

With 76,000 miles on the clock and ten stamps in the service book it’s a long way from the baggy, abused Imprezas you’ll find on eBay, though CCA’s overall condition score of 81/135 does suggest some fettling will be required after purchase.

But short of a 22B it’s one of the most desirable Imprezas, distinctive thanks to its two-door form and despite wearing me-too gold wheels (P1s came with titanium-finish items as standard) appears fairly standard.

For something completely different – no, really – how about a slice of American muscle? Not in the traditional sense, but in the sense that Ford’s Special Vehicle Team undoubtedly created a muscle car when it dropped a supercharged 5.4-litre V8 behind the bluff nose of a single-cab F-150 pickup. 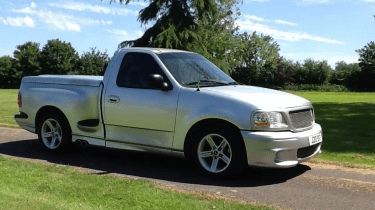 The 2000 SVT Lightning that resulted was an amusing and surprisingly competent performance car; Perhaps not capable now of the four stars (!) we gave it in evo issue 14, but every bit the ‘TVR Tuscan racer on stilts’ we described it as back in 1999. The estimate today? £9000-£12,000.

The British end is held up by two of the best-handling front-drivers ever: A 1990 Lotus Elan M100 Turbo (with a similar asking price to the M5) and one of the more compelling Mini special editions, a 1999 Paul Smith. The designer’s input extended to an eyecatching shade of blue paintwork, set off by lime accents on the rocker cover, in the boot and glovebox, and on a British Isles badge on the grille. They're unlikely to remain at £5000-£7000 for long.

You can view the full auction lot list here, in time for the auction itself on March 19, at the Warwickshire Exhibition Centre. Click on the gallery to see the cars described above, as well as a few more.