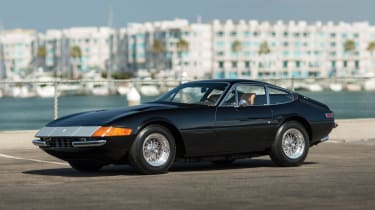 Monterey car week is upon us and RM Sotheby’s annual Monterey sale, held during the famous Pebble Beach Concours d’Elegance, has turned in another staggering collection of results.

The Concours is home to some of the world’s most spectacular collector cars, but the week’s auctions are always a highlight too.

A few in particular have caught our eye and several wear the insignia of il cavallino rampante. Three are Daytonas, including a black 1971 coupe and a red 1973 Spider – which sold for £580k (estimate £650k) and an incredible £1.78million (estimate £2million) respectively. A red 1972 coupe, estimated at £690k, did not meet reserve. 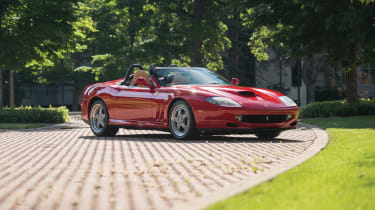 There was an F40 too – a 1990 example with only 1490 miles on the clock and a comprehensive service record, the last 16 years’ worth under Japanese stewardship and a history including buyers in Australia and Germany – even though the car remained in England during that time. It was estimated to reach £920k-£1.07m, and when the hammer dropped it came down at around £954k.

Also linked to Le Mans, albeit without registered results there, are a pair of GT40s. One, chassis P/1057, is a mark 1 road car in red and made £2.19million (against a £2.9million estimate), while chassis P/1061 is another mk1 road car and historic event regular; it was estimated to make between £2.9m and £3.25m, but did not meet reserve. 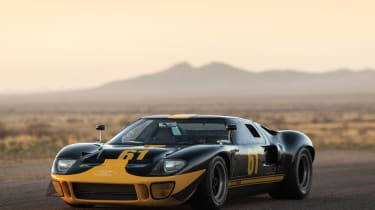 While there was nothing we’d describe as truly “affordable” in the sale – this is Pebble Beach, after all – we were also rather taken by a rough’n’ready 1922 Ford Model T dirt track roadster with a £46k-£61k estimate. It eventually sold for £22k.

There was also a piece of America’s limited hot hatchback history in the form of Carroll Shelby’s old 1986 Dodge Omni GLHS – a 175bhp, 2.2-litre turbocharged hatch whose name literally stands for ‘Goes Like Hell S’more’. Shades of Mitsubishi Evo ‘FQ’ in that one, but while it was estimated at between £31k-£46k, it sold for the same price as the Model T roadster.