Massive convertible SUV offers up V12 performance, go-anywhere ability and open-air fun - but it's not bound for the UK market 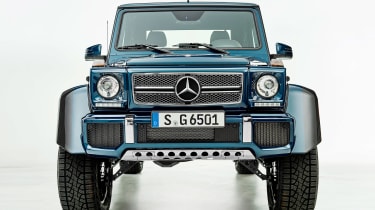 Mercedes has officially announced the latest addition to the G-class range. The G650 Landaulet is a beefed up, six-seat SUV with a fabric roof at the rear, and is the first SUV to wear the Maybach name. It’s been revealed ahead of a debut at the Geneva Motor Show in March.

Too much is never enough for some people, and that’s why Mercedes has been offering beefed-up special editions of its classic G-class SUV for a number of years now. First there were the G63 and G65 AMG models, with extra muscle courtesy of massive V8 and V12 engines. 2013 saw the bonkers G63 AMG 6x6, which turned the G-class into a six-wheeled monster truck, followed shortly by a similarly jacked-up G500 “4x4 squared.” Now though the company has launched what it describes as a ‘new masterpiece of automotive engineering’ – taking its forerunner’s beefed up body and turning it into a luxury drop-top. 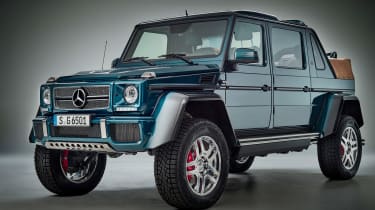 Well, kind of. The landaulet body style harks back to the early days of motoring, with a roof up front to keep your chauffeur under wraps while the master and mistress rode in supreme comfort in the open-air rear compartment. In the G650,  the first row of seats sits under a solid roof while the rearmost pair enjoy a retractable fabric top. Rear passengers enjoy enormous amounts of leg room, in the most luxurious cabin yet fitted to a G-class. You can even section off the front seats with a retractable glass partition, which will become opaque at the touch of a button.

Comfort is guaranteed thanks to the same seat design as the Mercedes S-class – with heating, cooling and massaging functions. There’s a ‘business console’ between the two seats, with heating and cooling cupholders, plus fold-out aircraft-style tray tables. Each rear passenger gets a ten-inch monitor for media playback, too. 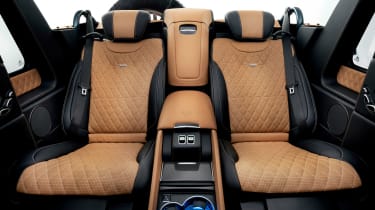 Up front, the G650 is powered by a monstrous 621bhp 6.0-litre V12 engine with twin turbochargers. That should be enough to provide sprightly performance, despite the car’s 3 tonne-plus weight and 5.34m total length. It doesn’t do anything for fuel economy though, which sits at 16.6mpg with exhaust emissions of 397g/km.

Mercedes hasn’t forgotten the G-class’ off-road heritage, though. The portal axles offer a huge ground clearance of 450mm, plus locking differentials and a low-range gearbox. Massive 22-inch wheels wrapped in off-road tyres should aid grip, too.

The Mercedes-Maybach G650 Landaulet will go on display at the Geneva Motor Show in March. It’s limited to just 99 units - none of which will be sold officially in the UK. Prices have not yet been announced, but expect them to equal or even exceed the G63 AMG 6x6, which debuted at £408,000.