Expected to be Tesla’s highest selling model, the Model Y will be built on a new platform and in a new factory 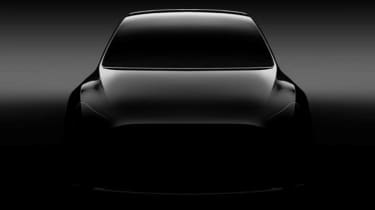 Tesla’s reputation as being an industry disruptor is set to grow as it continues to diversify its electric car range. Above is our first look at its latest model - a smaller sibling to the Model X SUV, which will be dubbed the Model Y. The California-based electric car manufacturer has divulged some details to accompany the cryptic picture, too.

During an upcoming investors conference, CEO Elon Musk confirmed that a new smaller SUV to sit underneath the Model X is planned for production some time in 2019. It's no shock that a smaller model is planned - after all, the Model X is an enormous car. It's actually the widest car on sale in the UK by quite some margin.

With the continued growth of the SUV market it is no surprise that the Model Y is in development, but the unexpected revelation is that Tesla will not base it on the upcoming Model 3 saloon.

In a phone call made to shareholders regarding the mistakes made during the larger Model X’s rollout, Musk explained “It would have been better to just design an SUV the way an SUV should be designed. Otherwise you’d just try to shoehorn something that doesn’t make sense.”

As a result, Tesla will be building the Model Y on an all-new platform, made possible by the fact the future SUV is projected be the brand's biggest seller in the future. Not only that, Musk extrapolated that it will give him and his team the ability to “build the car in a way that a car has never been built before”. What this means exactly no one can be sure, but more details will be revealed in September alongside Tesla’s planned launch of its electric lorry.

From what we can see in the shadowy teaser however, it is clear that aesthetically the Model Y is likely to draw much from the upcoming Model 3. Sharing a sleek and curvaceous bonnet and windscreen with the Model 3, the teaser is likely to be of a concept judging by the lack of visible wing mirrors.

But could the Model Y be a true evo car? The growth of the electric commuter car is forthcoming whether we like it or not, so Tesla’s work in changing our perceptions of them is a worthy mission. The Model X and Model S do their best, offering staggering performance, albeit without sparkling driving dynamics. The Model Y is likely to suffer the same fate, but we'll hold off on a judgement until we've driven one.