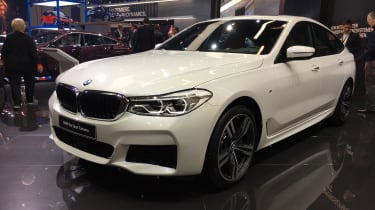 An all-new BMW 8-series will soon supplant BMW’s 6-series coupe, but the famous nameplate will live on in hatchback form thanks to this, the new 6-series GT. Debuting alongside a raft of other models at the Frankfurt motor show, the 6-series GT will reach customers in November this year.

In line with BMW nomenclature, as a ‘Gran Turismo’ offering the latest 6-series attempts to wrap a hatchbacked saloon in a sleek coupe body. Despite the heavily raked A-pillars, opinions will differ as to how successfully this has been accomplished, and confusingly the design appears to share the front end of the latest, G30-generation 5-series rather than bearing any sort of relationship to the old four-door 6-series, the Gran Coupe. 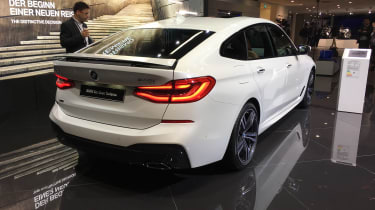 Though the car is a 6-series by name, then, it is in fact a direct replacement for the old 5-series GT. Making greater use of aluminium for the body and chassis, BMW claims the new car weighs 150kg less than its circa-two-ton predecessor and, thanks to a longer (87mm) but lower (64mm at the rear) body, glides through the air with less disturbance. The result is a 15 per cent improvement in exhaust emissions and fuel economy, and the weight saving will of course bring benefits in terms of handling and performance, too.

Sporting design cues are thin on the ground, though the 6-series GT does feature a spoiler that automatically extends at 75mph then retracts as speeds dip below 50mph. M Sport-spec models like the one seen here also get the familiar deep air intakes, low-hanging side skirts and an aggressive rear bumper, though none of these manage to disguise the GT as anything other than a large saloon with a swollen roofline. 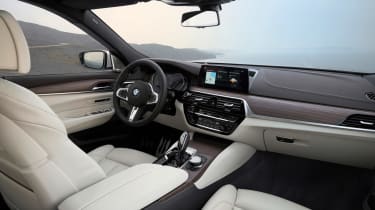 In a sign of the times, the entry-level 630i model will get a 2-litre four-cylinder turbo petrol engine, rather than the straight-six those numbers have traditionally denoted. That might leave some buyers feeling a little short-changed, but it’s a strong engine, making 255bhp and 295lb ft – enough to take the car to 62mph in 6.3 seconds. The 640i, meanwhile, does get half-a-dozen cylinders – plus a turbo – and with them 335bhp and 332lb ft. The additional torque sees the sprint time to 62mph fall to 5.4 seconds, and models equipped with BMW’s xDrive four-wheel-drive system will shave another tenth from that.

Only one diesel option will be offered at launch – BMW’s familiar 3-litre turbocharged straight-six. With 261bhp and a generous 457lb ft, it’s quicker than the base petrol model to 62mph, taking 6.1 seconds while the xDrive model manages it in six seconds flat. 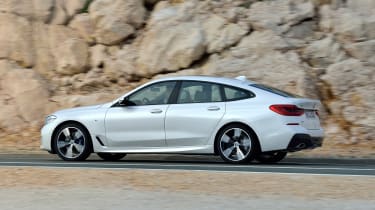 BMW has not released details of the 6-series GT’s xDrive system, but there’s no reason to suspect it will be any different to that used in other models. That would mean a torque split of 40:60 front to rear, and the ability to redirect all torque to either axle if wheel-slip is detected. As both differentials (front and rear axle) are open, torque is allocated from side to side by braking. No matter what variety of fuel they drink, all 6-series GT models will use an eight-speed Steptronic automatic transmission.

Underlining the car’s grand-touring credentials is self-leveling air suspension at the front as standard. BMW’s optional Adaptive suspension adds air suspension to the rear axle as well as Dynamic Damper Control. With air suspension at both ends, ground clearance can be increased by 20mm at the touch of a button (for negotiating dirt tracks, perhaps) or lowered by 10mm in Sport mode.