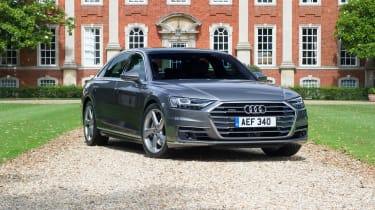 Audi will call upon family member Porsche and electric power when it comes to sourcing a suitable powertrain when developing its replacement for the fastest A8 derivative, S8 and S8 Plus.

The outgoing S8 and S8 Plus models are currently powered by 4.0-litre, twin-turbocharged V8 engines producing 513bhp and 597bhp respectively, and their replacements will utilise an engine of the same displacement, cylinder and turbo count. The difference is that this engine will come from Porsche. The Stuttgart based manufacturer developed a new twin-turbocharged V8 for its new Panamera, launched last year, this unit is available to all VW Group members and will also feature in the new Bentley Continental GT.

In the Panamera Turbo, the new V8 produces 542bhp and 568lb ft of torque, which is plenty to see the four-door Porsche reach 62mph in a claimed 3.8-seconds and crack on to 190mph. For the S8, Audi is expected to retune that engine’s output to around 530bhp (well, it can’t be seen as having its cake and eating it, can it?), still plenty for the new S8 to sprint to 62mph in around 4.0-seconds and reach a 185+mph maximum.

With Audi’s drive to electrification a focus of the new A8 range you can also expect the range’s top line performance model to come in the guise of a new S8 Plus, it also powered by a Porsche sourced engine. For the S8 Plus Audi will look to the plug-in hybrid powertrain installed in the forthcoming  Panamera Turbo S E-Hybrid. In the Porsche the twin-turbo V8 produces 550bhp with an additional 136bhp coming from the electric motor. With a combined 627lb ft of torque, the Panamera Turbo S E-Hybrid is said to accelerate to 62mph in 3.4-seconds and top 193mph.

As with the regular S8, it is expected that Audi will detune Porsche’s plug powertrain for the new S8 Plus, so expect around 630bhp and sub 600lb ft torque figure. Not that this will dent the model’s performance credentials, with an expected sub-four second 0-62mph time and a 190mph top speed.

Both S8 models are scheduled be announced early in 2018 after the regular A8 models have gone on sale.