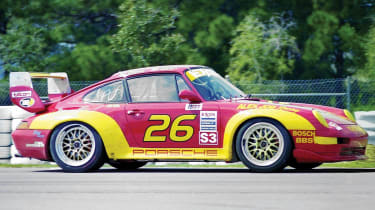 London’s 2017 RM Sotheby's auction took place last night, with a vast selection of spectacular cars passing through the Battersea Evolution sale room to find new homes with some of the world's most illustrious collectors.

Watch the video below to see what happened in London last night, or keep reading for some selected highlights from the sale.

Stars of the show

One of the expected highlights was a 1997 Porsche 911 Carrera RSR liveried in red and yellow and sitting on gold three-piece wheels. The RSR was the handywork of the German manufacturer's formidable racing arm. After Porsche Motorsport delivered just thirty to customer teams competing in American and European GT series, air-cooled engines in 911s were no more as the road-going 996 generation 911 ushered in the water-cooled era. 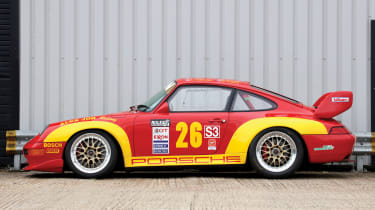 In the Carrera RSR the 3.8-litre flat-six featuring in the road-going 993 911 lineup was fettled by Porsche's engineers to cope with arduous requirements of endurance racing. The power unit gained a revised engine block, special pistons sleeved in reworked barrels and high-lift cams to harness breathing improvements delivered by upgraded exhaust manifolds and individual throttle bodies.

This example managed to negotiate Sebring, Daytona and Road Atlanta relatively unscathed retaining its original tub. It had a pre-sale estimate of £800,000 - £900,000 but didn't sell on the night despite attracting a high bid of £700,000 which would have equated to £792,560 including buyer's premium.

Another RS-badged model etched into Porsche folk law is the 2.7 RS lightweight. Only 17 were built in right-hand drive, none arguably more successful than this steeped-in-victory example which boasts multiple rally wins. The iconic red-on-white finish, duck tail wing and dainty Fuchs alloys had plenty of prospective buyers taut and tense as the bidding got underway.

The RS’s CV showed a plethora of podiums across Ireland and Great Britain, placing first in the Donegal International Rally and Castrol Manx International Rally. After a brief stint racing in South Arica, fitted with a host of modifications to meet the discipline's standards, the car underwent an extensive restoration putting it back in immaculate, original condition. It sold for £764,375 including buyer's premium.

> Click here to read our review of the Porsche 911 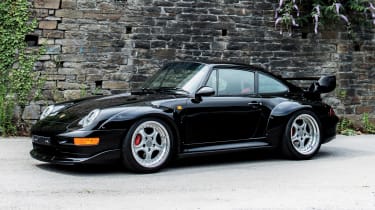 While new owners await the arrival of the new GT2 RS, they could have eased their harcore Porsche hankering with the purchase of the inaugural GT2. Another late air-cooled hurrah, the 3.6-litre unit in the first GT2 produced 424bhp courtesy of twin-turbocharging in the early guise that was featured here. Certainly not a Porsche to cut your teeth on, the low odometer reading of 11,185 miles is hardly surprising in light of widow-maker references.

Restoration work, or rather repairs were forced after the car suffered a shunt while lapping the Nurburgring. It was subsequently transported back to Porsche before being put back into factory-fresh condition. With no indication of inflation in Porsche market tapering off, the pre-sale estimate of £675,000 - £750,000 was pretty accurate with the hammer falling at £685,000 – a figure which rose to £775,560 with buyer's premium.

Amongst the heavy helping of Porsches at the RM Sotheby's sale were plenty of other delectable machines: a Ferrari Enzo achieved a hefty £1,805,000 (including premium) while a Lamborghini Countach LP 400S sold for £342,500, again including premium. The Mazda RX-7 Evo Group B Works rally car was a real motorsport highlight, selling for £184,000, while a collection of stunning Jaguars also found new homes.