Will Mercedes-Benz’ flagship luxury Coupe be able to compete against the all-new Bentley Continental GT? 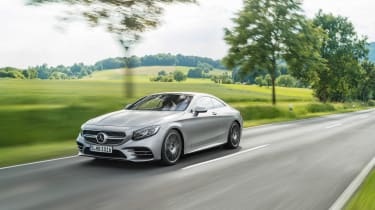 Mercedes-Benz has revealed prices for its facelifted S-class Coupe with prices starting at £103,715 for the S 560 and rising to £189,615 for the range topping AMG S 65. Available in the UK with V8 and V12 power-plants, the new four-seater coupe and cabriolet can be ordered now with deliveries to start at the beginning of 2018.

Most of the changes for the revised S-Class Coupe revolve around mechanical and technological updates, with both S 560 and hot-rod AMG S 63 variants benefitting from new V8 engines while all models receive tech upgrades for the infotainment and autonomous driving systems.

> Click here for more on the new Bentley Continental GT

Starting with those new V8s, the S 560 will be the entry-level model (if you can call it entry-level) in the UK, with Mercedes-Benz not offering the V6-powered S 450 sold in other markets. The S 560 makes use of Mercedes-Benz’ new 4-litre bi-turbo V8 which produces 462bhp and 516lb ft of torque endowing the Coupe with a 4.6sec 0-62mph time. Designed more for effortless waft-ability than outright performance, the new V8 utilises a variety of fuel saving measures such as cylinder deactivation and offers improved internal pumping losses.

A flagship AMG S 65 is still available, now with 621bhp and 738lb ft, but as these outputs only offer slight improvements over its smaller-engined S 63 sibling, you would really have to want those extra four cylinders and a V12 badge to justify its hefty (£61k) price jump. The S 65 is also only marginally quicker than the S 63, beating its 0-62mph time by a scant 0.1sec.

Both the S-class Coupe and Cabriolet are not just about outright performance though, preferring to concentrate on a combination of effortless GT cruising ability and state of the art technology. The new S-class Coupe and Cabriolet feature the same upgraded infotainment system as in the saloon, sharing new 12.3-inch dual displays contained in a single glass housing. The steering wheel has also been changed over to the same one as in the saloon, incorporating touch sensitive controls for the vast infotainment and driver information screens. 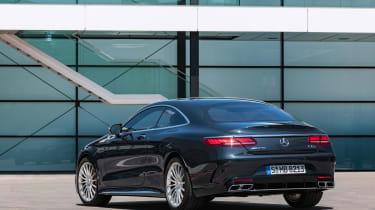 As for exterior changes, Mercedes-Benz has subtly massaged the previous car’s stately design, adding more aggressive bumpers and all-new OLED taillights. Much like the units on the BMW M4 GTS and Audi TT RS, Mercedes-Benz incorporate 66 individual OLED panels that light up with different intensities depending on the application.

S 63 and S 65 models incorporate the Panamerica grille used on other AMG models and engine-specific details on the lower bumper. Cabriolet models all feature the same design updates as the Coupe too.

> Click here for our review of the new Porsche Panamera

As far as equipment is concerned all the S-class Coupes come well equipped as you'd expect given the £100k plus price tags. The S 560 will only be available in AMG trim and includes Airmatic air suspension, Comand Online, electrically adjustable seats and steering wheel, Burmester surround sound, Android and Apple CarPlay and 19-inch alloys. The S 63 adds the expected AMG sports exhaust, seats, sports suspension and 20-inch alloys plus a seat comfort package.

The S-class Coupe and Cabriolet could well be the most complete GTs on the market, incorporating Mercedes-Benz’ full arsenal of technological prowess with massive performance from its impressive new drivetrains. The issue could lay in the S-class’ inability to compete with all-new rivals like the upcoming Bentley Continental GT in terms of sheer desirability. Outright capability may be of the upmost importance when it comes to a luxury saloon, but remove a couple of doors and suddenly the ability to transcend real GT opulence in the same way a Bentley can becomes something that even Mercedes-Benz might struggle to pull off.

Revealed at the Frankfurt motor show, the new S-class Coupe will hit the UK's showrooms at the beginning of 2018.