If you wanted to travel at over 200mph up a runway in a car, there would be much easier, much cheaper and much more convenient ways of doing so than the way the team behind Bloodhound SSC did when they sent their record attempt car to that speed last week.

The car was fitted with just a single Rolls-Royce EJ200 jet engine from a Eurofighter Typhoon, rather than the additional rocket that will eventually help power it to its top speed, before closing down Newquay International Airport. Then driver, Andy Green, used the runway to take Bloodhound SSC to 210mph in just 8sec – twice.

> Read about one of the world's fastest production cars, the Bugatti Chiron

In actual fact, watching Bloodhound SSC hit the double ton, even in such a short time and with the help of afterburners, wasn’t that astonishing. It’s quite small and conventional-looking, sort of like a jet fighter with no wings, compared to the current land speed record car, Thrust SSC. 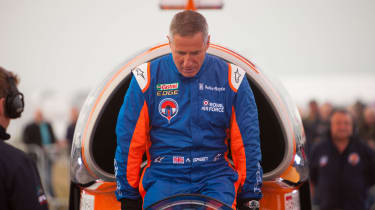 What’s more, in such a wide and open environment – like a runway – where bigger, heavier vehicles – like passenger jets – reach similar-ish speeds, 210mph almost seems pedestrian. For a car that’s destined to travel almost five times faster, 210mph isn’t all that impressive. Yes, five times, as Bloodhound SSC is being created so that it will reach 1000mph when it’s boosted by its extra rocket. That’s just over 447 metres per second, enough to travel the length of a football field in 0.234 sec, and would take approximately only 10 minutes and 12 seconds to travel the entire length of Wales (170 miles). No matter what standardised measurement of speed you use, it’s exceptionally fast.

But the intended speed isn’t the only remarkable thing about the Bloodhound project. The team spent ages trying to find a spot that was big and flat enough for the car to reach the proposed record-breaking speed. They settled on the Hakskeen Pan, a part of the Kalahari Desert in the Northern Cape area of Southern Africa. It’s perfect because it provides the 12.5 miles by 0.6 mile area of hard surface that’s needed for the 1000mph run. Plus, the local government supports the project, seeing it as an opportunity to bring publicity, infrastructure, money and skills to the area.

But the surface is littered with rocks. Well, it was. The entire area has been cleared of debris and scraped smooth by hand. A team of 317 local people were employed to tidy the 20,000 by 1100 metre area, and they removed 48,000 cubic metres, 16,000 tons of rock from 22million square metres of desert surface.

Creating a 1000mph rocket-powered car seems like a doddle compared to the effort needed just to clear that space. But rather than back-breaking manual labour, it’s a huge quantity of engineering effort, massive amounts of intelligence and decades of experience that will give Bloodhound SSC a fighting chance of reaching its goal. Even though the car has began testing, it’s far from finished and there are some big hurdles in the way before it can run with its complete set of propulsion devices.

The majority of the thrust will come from not just a ‘simple’ rocket, but a cluster of hybrid rockets that use a combination of propellants; synthetic rubber and hydrogen peroxide. This is a development from the original plan and to make space for the multiple thrusters the rear suspension needs to be redesigned. The current plan is for the suspension arms to be rotated so they sit longitudinally rather than transversely; it sounds simple but we expect it will be anything but.

At the moment, a Jaguar V8 engine supplies the rocket as it’s the easiest and lightest unit to provide the 550-560bhp needed to pump the sufficient amount of fuel. However, the team are looking to replace the internal combustion engine with an electric motor and batteries. They see that the flexibility, in terms of packaging, that a smaller electric motor could provide and separate batteries would be benefit. With the development of solid-state batteries and super capacitors accelerating at a substantial rate, the Bloodhound engineers think the technology is good enough to now use. It wasn’t when the project started nine years ago.

As well as putting on a spectacle for supporters and investors of Bloodhound SSC, the runs at Newquay provided some useful information for the engineers to and allowed them to actively test a lot of its equipment and sensors. Further tests will take place next year in South Africa, initially the jet engine and conventional rocket will take Bloodhound SSC up to 800mph before the ultimate hybrid boosters and EJ200 combination will take it to its four-figure target.