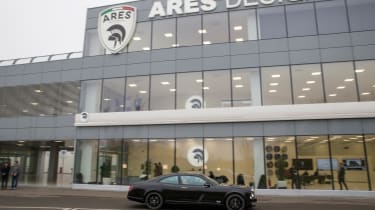 Ares Design has opened the doors to its new 18,000-square metre Modena Technical Centre to showcase its new high-tech facility and introduce its latest bespoke models. Ares Design has been in existence for three years and is presided over by co-founder and CEO, Dany Bahar, who previously had roles at Red Bull, Ferrari and Group Lotus.

In those three years, Ares Design has developed its bespoke facility in Modena to design, develop and produce coach-built limited-edition cars for clients from around the world. The cars that Ares has now revealed have all been developed, designed and constructed through a high-quality network of expert suppliers under instruction and guidance from Ares Design.

In the true tradition of coach-built machinery Ares’s take on the Bentley Mulsanne was driven by a customer who wanted a modern interpretation of the Brooklands and the resulting machine was so admired by a friend of the original customer that he commissioned Ares to build a second.

It’s a comprehensive conversion that involved a full three-dimensional scan of the four-door Mulsanne before Ares could put its CAD skills to good use. The roof was reshaped (and is now constructed from carbonfibre) while the B-pillars were moved backwards and the doors were extended. Ares’s bespoke leather designers completed the interior by either modifying the original Bentley parts or constructing new sections as required.

Thanks to extensive use of aluminium and carbonfibre in its construction Ares says the Mulsanne now weighs over 400kg less than the four-door and a claimed performance upgrade for the 6.75-litre V8 ensures a further boost in performance. Prices start at €715,000 (circa £635,000).

With retro styling being all the rage these days and very popular with Ares’s client base this reimagined Corvette Stingray is an example of what Ares can offer. The brief was to bring the 1964 machine thoroughly up to date and mechanically it features a 517bhp LS3 V8 and five-speed transmission hooked up to a Viper differential. These were installed in a fully restored and modified C2 Corvette chassis while the body was fully restored and modified to accept significantly wider modern wheels.

The interior has been thoroughly updated with modern or rebuilt instruments, an Alpine sound system controlled by an original style head unit and with completely hidden speakers along with Bluetooth capability. The seats were completely refurbished while Ares’s leather specialists clad the interior in new hide. 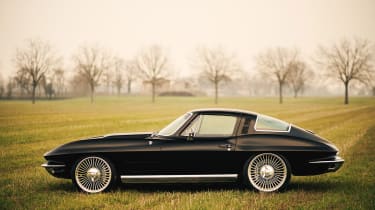 Ares has already built 11 X-Raids for its customers and while it might not be designed with Europe in mind it is a comprehensive reworking of the Mercedes G-class. The body is constructed from carbonfibre – which Ares says shaves 200kg from its kerb weight – while the AMG V8 has been comprehensively fettled, too.

Bespoke high-performance pistons and rods and a balanced crankshaft along with hybrid turbochargers, a reworked intake system and intercooler along with a bespoke exhaust has lead Ares to claim a headline figure of  819bhp and 700lb ft of torque. 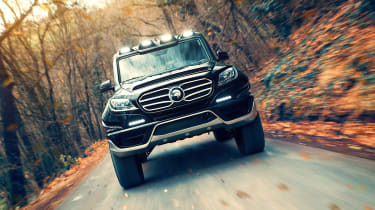 It has axles portals to raise its ride height and a KW Dynamic Damping Control suspension set up with three-way electronic adjustment. Movit six-piston caliper brakes are covered with Ares 22-inch forged wheels. Inside the dash has been reshaped and clad in leather while the rear bench has been replaced with two individual ‘VIP’ seats. Prices start at €725,000 (circa £645,000).

Over the years many companies have had a go at modifying the Defender and Ares’s take on the icon has been engineered in conjunction with the British firm JE Motor Works. It features an extensively reworked Land Rover V8 that can be had in both naturally-aspirated or supercharged forms. It’s mated to a six-speed automatic gearbox. 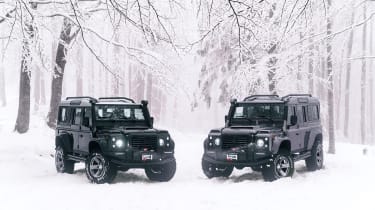 Inside Ares has effected a thorough transformation with leather adorning just about every surface (including the roof lining) while the floor is covered in chequer plate aluminium. 53 of these Defenders have been commissioned with prices starting from €200,000-€300,000 (circa £175,000-£220,000).

In a similar vein to the Corvette Stingray Ares is currently completing one of its most ambitious builds, a 1991 Carrera 2 Targa. As well as having a comprehensive restoration the car is being equipped with components from more contemporary Porsches, mainly those from the 997 Carrera. Engine, transmission, axles, suspension have all been fitted while inside it will have all the modern trappings such as 21st century air conditioning and the infotainment system from the Panamera. 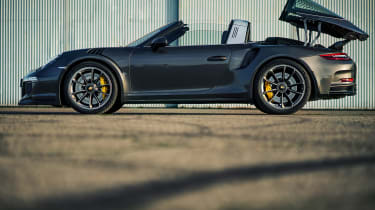 In the pipeline - GT3 RS Targa and Ferrari 412 homage

We’ve already glimpsed Ares’s modern day take on the de Tomaso Pantera based on the Lamborghini Huracan and clad in carbonfibre panels (€715,000 or circa £635,000) and later in the year it’s hoping to complete a similar project which will turn a Ferrari GTC4 Lusso into an homage to the Ferrari 412.