GFG Style and Envision’s Sibylla revealed ahead of Geneva debut 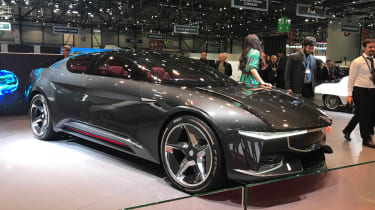 Italian design house GFG Style (founded by Giorgetto Giugiaro) has partnered with Chinese smart energy specialist Envision to deliver the Sibylla concept. The luxury saloon will make its public debut at the 2018 Geneva motor show next month, however neither partner has confirmed whether it’ll make production.

This perhaps explains why there’s little information regarding the powertrain. So far all we know is it will be four-wheel drive, with two electric motors placed on both axles. Despite the dearth of technical specifications, Envision has disclosed information about the intelligent charging system that will support the Sibylla (we’ll come on to that).

In keeping with the raft of all-electric cars coming to the fore the aesthetic is suitably futuristic, although it has drawn inspiration from Giorgetto Giugiaro’s back catalogue of low-slung sports cars from the ’60s and ’70s, which includes the BMW M1, Mk1 Lotus Esprit and original Maserati Ghibli.

The low, bluff nose, aggressive front wings and raked windscreen lend a sporty look to the front end, however the chunkier rear doesn't pull off the sporty image as well. The perceptive few will have spotted the familiar boomerang tail lights, which featured on the Maserati 3200 GT, which is another Giorgetto Giugiaro-designed car.

The headline design feature is the sliding glasshouse roof. A world first, according to GFG Style, the sliding windscreen front section makes for easy ingress: mounted on structural rails it can slide forward and backwards, and there’s gullwing rear doors, too. In size terms the Sibylla is similar to a BMW 7-series, stretching over five metres in length and standing almost one and a half metres tall.

> Why your next performance saloon car will be a hybrid

Inside, you'll find room for four occupants, who’ll have their own individual seats that slide and recline. Upfront, the fully digitised instrument display is integrated into a concave dash that stretches the width of the cabin.

The Sibylla’s energy consumption will be monitored and managed by Envision’s EnOS operating system. The EnOS system ‘provides intelligent control for how, where and when devices produce, store and use energy’. Envision hopes to integrate as much renewable energy into its energy portfolio, which the car will tap into to make it as clean as possible.