The new Range Rover Evoque due to be revealed this month with first deliveries in 2019. Here’s what we know so far. 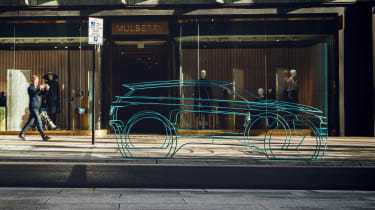 Ahead of its reveal on November 22nd, the new Range Rover Evoque has been teased by a set of wire sculptures in London.

With the current car having been in the public eye for almost a decade and on sale for over 7 years, the Evoque is most definitely due an update. Although the unusual wire frame sculptures don’t give us a huge amount of detail, it’s clear from spy pictures of the new car in testing that the brand’s second-generation compact SUV will retain a similar overall shape, with its distinctive rising waistline making an appearance.

> Range Rover Evoque review – with once exotic style now familiar, does the Evoque still have what takes?

What is evident, though, is that the next Evoque will sport design cues from the rest of the Land Rover range, most notably the recent Velar and Discovery. The rear lights show a clear resemblance to those found on the Velar, and we’d expect to find more of this across the rest of the exterior. As revealed in spy pictures, the new Evoque will also get Jaguar Land Rover’s new multi-screen cabin design, a vast improvement on the current, outdated interior. Due to a marginally lengthened wheelbase, a slight increase in interior room is also expected. 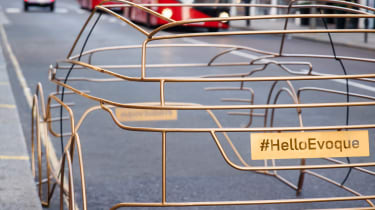 Range Rover Evoque prices are predicted to start from just over £30,000, although you’ll likely be able to configure one to over £50,000 if you so wish. A 48V mild hybrid model may also make an appearance in the future, but don’t expect an SVR, as the Velar is due to take that title. We expect the Evoque to be powered by JLR’s Ingenium petrol and diesel engines as opposed to a mighty V8, with the most powerful model likely producing around 300bhp.

Rivals come in the form of the BMW X3 and Porsche Macan, both of which are excellent cars to drive considering their size. The current car couldn’t quite match them in driving dynamics, but new tweaks to the model could bring it up to speed.

With Jaguar Land Rover recently revealing that it had made a significant loss due to declining sales, could the new Evoque be what the firm needs? Order books open on the day of reveal, so time will tell.