New Velar looks and feels special inside and out, and offers a suitably luxurious driving experience too 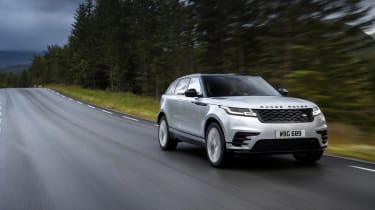 Land Rover says the Velar fills white space in the range between the Evoque and Range Rover Sport. To some this may look like needless niche-filling, but since the Velar does advance the brand’s style and technology, it can justify its existence fairly easily. The question is, how does it drive?

A range of four- and six-cylinder petrol and diesel units will be available in the Velar from launch. The inline fours are all 2-litres in capacity and from JLR’s Ingenium family of engines, and each offers a perfectly reasonable turn of pace. The entry-level D180 produces 178bhp and covers the 0-60mph measure in 8.4sec, while the 237bhp diesel knocks that down to 6.8sec, with a 130mph top speed for the former and 135mph for the latter. There are two petrol four-pots, the P250 and P300, which develop 247bhp and 296bhp respectively, with 6.4 and 5.7sec 0-60mph times.

The diesels will mostly be of interest for their economy, and Land Rover quotes a combined figure of 52.5mpg for the D180, 48.7mpg for the D240. The six-cylinder D300 isn’t far behind at 44.1mpg combined, and that figure’s better than any of the petrol models, which range between 37.2mpg (P250) and 30.1mpg (P380). An eight-speed ZF automatic gearbox and four-wheel drive are standard across the Velar range. 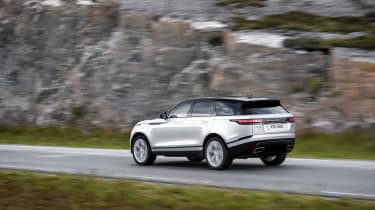 Range Rover Velars offer a suite of technologies to help drivers cover the sort of terrain they’re highly unlikely to tackle in day-to-day driving. Among these are sophisticated traction control systems, Hill Descent Control and Gradient Release Control, with Terrain Response 2 and All Terrain Progress Control both optional.

The former of those two optional features allows the driver to select pre-determined settings according to the terrain they’re tackling (such as mud and snow or rocky tracks), while the latter is like an off-road traction control, maintaining a constant speed regardless of terrain both up- and downhill.

Many owners will be more swayed by the Velar’s striking interior infotainment technology, split between a TFT screen in front of the driver (from SE trim and above) and two ten-inch touchscreens within the dashboard. The upper of these tilts into view as the ignition is started and displays navigation, audio and external camera images when off-roading, while the lower screen forms part of a clean, modern centre console with access to the ventilation functions and Terrain Response. Both are intuitive to use in a way we’ve not really seen from JLR infotainment systems so far, though the sheer number of functions available means they could prove a little distracting if you attempted to use them on the move.

If you’re already open to the idea of SUVs then the Velar is among the more appealing of its breed. The exterior styling is striking, particularly in profile (it also has a drag coefficient of 0.32), and the interior a wonderfully calming and beautifully built environment. It offers the usual commanding Range Rover driving position too, if closer to the Evoque’s high-waisted feel than the less cocooned nature of a full-size Range Rover.

We sampled both the D300 and P380, giving a good impression of the higher end of the Velar range. And both are very well suited to the car, remaining smooth and quiet in most situations but delivering a hearty surge of performance with further exploration of the right-hand pedal.

The P380 feels like the car you’d opt for if money were no object, being more tuneful than the diesel and revving towards its upper reaches with a little more enthusiasm. The D300 isn’t quite as smooth, and doesn’t hide its diesel grumbles as well as rival engines from BMW or Mercedes-Benz, but the ease at which reasonable pace can be summoned does suit the Velar’s relaxed character, and naturally it’ll prove a little less thirsty in real-world driving. The eight-speed automatic transmission is smooth and unobtrusive in both applications. 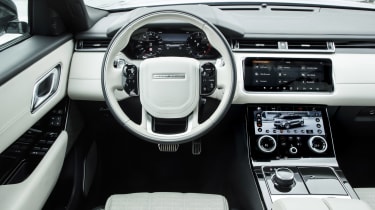 Both drive well too, with a buttery feel to all the controls and steering that proves both accurate and well-weighted, if not dripping with feedback. The air suspension offers good body control too, while isolating bumps from the cabin. Like many air systems sharper intrusions can be felt as a thud, but the stiff structure means you won’t be wincing every time you encounter a pot hole. Only the optional 22in wheels can spoil things a little, with not quite enough sidewall to absorb the shock of certain bumps – 21in wheels are better in this regard, and a Range Rover engineer confides that 20in items offer the best compromise between ride and precision.

As a Range Rover, the Velar works very well off-road too. The ease at which it covers terrain does come at the expense of the smell of hard-working brakes – the constant nibbling of the discs to maintain traction exacts its toll – but for such a stylish take on the SUV concept it’s still a surprise how much it’s able to tackle.

The £44,830 entry price is sure to bring plenty of people into Land Rover showrooms, though we suspect many will eventually walk out with a much more expensive car. 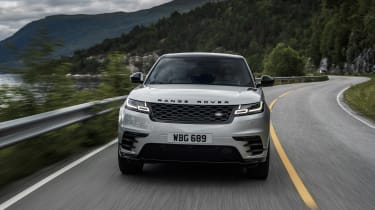 In First Edition trim, available only in D300 and P380 form, prices rise as high as £85,450, though even at this figure it feels worth the price. All Velars are well-equipped, with LED headlights, retracting door handles, heated seats, cruise control and Terrain Response as standard, with matrix LED lights, 20-way powered massage seats, adaptive cruise and various other features available further up the range. First Edition models are available with an exclusive Flux Silver satin paint finish, even more leather interior trim, a 1600W Meridian sound system and matrix-laser LED headlights.

You’ll get into a Jaguar F-Pace for a little less, (£34,730-£53,365) but while the Jag is also a more entertaining steer, it doesn’t feel a patch on the Velar in terms of ambience or features. Few rivals do, in fact.