Land Rover’s SV division has changed tack with the Velar, promising a more sophisticated flagship than the usual SVR approach 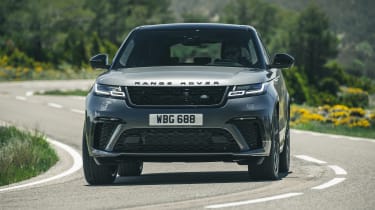 The arrival of the Range Rover Velar was something of a key moment for Land Rover – it introduced a new design language, a road car-based platform shared with Jaguar and because of that a whole new ethos as a Land Rover that might actually be somewhat entertaining, rather than just competent to drive.

It never quite took full advantage of this on-road focus though, as the Velar’s most potent variants had to make do with either a smooth but dull V6 diesel or the really rather dreadful supercharged V6 petrol. Until now, that is. With some help from Land Rover’s Special Vehicle Operations department, a new supercharged V8 flagship has arrived, but with a somewhat different approach to JLR’s usual SVR recipe.

> Click here for our review of the Jaguar F-Pace SVR

That’s because the Velar SVAutobiography Dynamic to use its full, if clumsy name, is a somewhat more gentle, balanced approach to a flagship model – a recipe that appeals in a different manner to the somewhat extrovert character of the larger Range Rover Sport SVR.

This also provides some air between it and the closely related Jaguar F-Pace SVR, and represents a somewhat more grown-up approach to the mid-sized performance SUV compared to rivals such as the BMW X3 M, Mercedes-AMG GLC63 S and Alfa Romeo Stelvio Quadrifoglio. 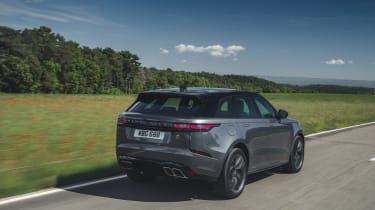 Under the clamshell bonnet lies JLR’s 5-litre supercharged V8 engine, here with an identical 542bhp to the F-Pace SVR. The power unit itself is under the LR-V8 designation, and has been topping various Jaguar Land Rover products since 2009. It might lack the latest V8 tech trends such as a hot-V turbocharger layout or cylinder deactivation, but makes up for it with an easy, laid-back nature and huge performance at any engine speed. The supercharger and V8 woofle is not as obvious as it is in other SV products, but there is enough in the background to raise a smile when pootling around at low speeds.

One advantage of the mechanically driven supercharger is the instant response that goes with it. This makes the engine more responsive than the V8 units found in an Audi RSQ8 or Porsche Cayenne Turbo, even if it does lack their outright punch. Connected to it is a ZF-sourced eight-speed torque-converter automatic transmission, sending power to an active all-wheel-drive system that is able to shuffle power infinitely between the front and rear axles, although most of the power is sent to the rear axle most of the time. The rear axle also features active torque vectoring, handy for both on- and off-roading applications, if you ever plan on taking your Velar off the pavement. All together, the powertrain will shoot the near 2.1-ton Velar SVA to 62mph in 4.5sec, plenty for this more relaxed interpretation of performance SUV. 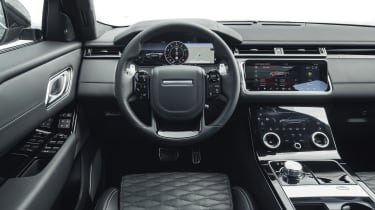 It’s always worth mentioning that underneath its skin the Velar is more Jaguar than Land Rover, sharing its chassis with the Jaguar F-Pace, which itself is closer to a lifted XF saloon than Land Rover. As a result, the entire Velar package, from the underlying proportions to the way it drives, is just that little bit more road-biased than its other Range Rover siblings.

That’s not to say the Velar’s Land Rover-ness has been lost, rather it represented a rather different type of platform for Land Rover’s engineers to apply their own components to. The suspension, for instance, is of air rather than the standard coil springs and adaptive dampers found in the F-Pace SVR. This might suggest a compromise in road feel, as air systems in almost all applications exhibit a certain disconnect, and indeed it does, but so too is there a significant rise in comfort and sophistication, especially considering the 22-inch wheels fitted to this car (and surely almost all cars ordered by customers).

The core suspension hardware might not be ostensibly different from that of other air-sprung Velars, but finer detail changes have been applied, including thicker anti-roll bars, and a new Dynamic mode for the air suspension. Bespoke 21-inch forged alloy wheels are standard fit, but the aforementioned 22-inch options will doubtlessly be the more popular option. Either way, both wheel options save 2.5kg per corner compared to the equivalently sized options on standard Velars. 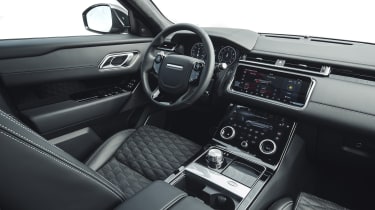 Climb into the Velar’s plush interior, prod the awkwardly placed starter button and you’re greeted with the fast high-pitched whirr of the starter motor, followed quickly by a deep bass-heavy rumble that can only come from a big V8 engine. It’s an experience that instantly makes the Velar feel expensive, one it successfully manages throughout its driving experience. At low speeds the SVA feels effortless and regal, in much the same way as the Big Daddy Range Rover, floating on a wave of torque from the V8. The low-speed ride is surprisingly polished considering the 22-inch wheels of our test car, and it flows over broken tarmac with a general refinement that clearly takes advantage of the reduced unsprung mass of the lighter wheels of the SVA, but that disconnected feeling associated with air suspension does apply here, but doesn’t inhibit to the same extent as it does in other performance SUVs.

That’s because the Velar just feels exceptionally supple and sophisticated, but at the same time controlled. It’s very well judged, and rather than feeling needlessly stiff or over-damped, it speaks of a confidence in the underlying chassis that isn’t always apparent in rivals. Push harder, even in the suspension’s Dynamic mode, and the Velar’s body does move around to a certain level, but it never lacks control, floating over the worst imperfections in the road surface without feeling like that 542bhp is getting away from you. Drive harder and the Velar’s significant weight is always noticeable, but to the effect of pummeling the road surface into submission, rather than feeling like an oil tanker in rough seas. I wouldn’t go so far as to call it fun – it certainly lacks the playfulness of something smaller and more nimble such as the Alfa Romeo Stelvio Quadrifoglio, but it’s very satisfying and without any glaring dynamic oversights.

If there is a weakness with the dynamic package, it’s the brakes, which despite their substantial 395mm disc size and decent feel, lack the outright power to haul in all that kerb weight with full confidence. 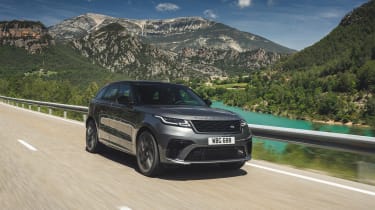 Like its lesser models, the Velar SVA is often caught between other rivals in size and specification. At a rather steep £86,685, the SVA is priced higher than most rivals of equivalent interior accommodation, but its V8 engine and air springs have otherwise come from the class above. It’s also fully loaded, with Land Rover’s most sumptuous semi-aniline hides, bespoke knurling to various switchgear components and the bespoke exterior styling all adding to the value equation.

At the mid-£80k mark, the Velar’s closest rivals are also powered by V8s, although distinctly varied. The Mercedes-AMG GLC63 S is a few grand cheaper at £83,665, is a few horsepower down at 503bhp, and lacks the Velar’s subtlety, but in its place is a more overtly aggressive dynamic package and one of the most potent V8 powertrains in the class. The other circa-£80k rival is Audi’s SQ8, which might share eight cylinders, but in the form of a twin-turbo diesel paired with a 48V mild-hybrid system and electric supercharger. The Audi is less overtly sporting than the AMG, perhaps matching the Velar’s more laid-back approach, but its measly 429bhp and chunky weight keep it from feeling anything like as potent as its petrol rivals, even if it is more efficient.

From here there is all manner of rivals both bigger and smaller that could be considered competitors, such as the awful BMW X3 M, the larger but similarly priced X5 M50i, maybe a Porsche Cayenne S or high-spec Macan Turbo if you prefer – need we go on. The most obvious rival is in-house though. The Jaguar F-Pace might lack the Velar’s air springs and luxurious appointments, but it does cost over £10k less yet shares the same basic powertrain in an even more charismatic form, and is the more focused and dynamic of the two. The Velar SVAD is somewhat of a more sophisticated flagship then that might be difficult to justify on paper, but it remains a far more considered and complete package than other so-called ‘performance’ SUVs. Best take it a little easier and enjoy the V8 burble for what it is, rather than the performance it can give you. 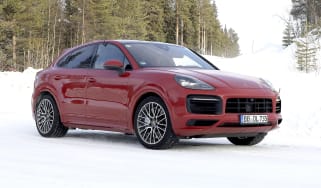