Range Rover review - hugely capable, but can it compete with saloon rivals for luxury?

Everything to everybody, everywhere - the Range Rover is unsurpassed. 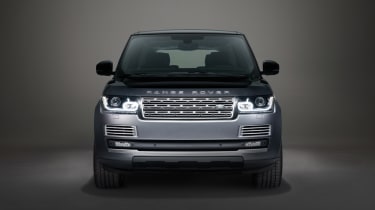 No one could've predicted just quite the impact that the original Range Rover would have over the automotive world when it was unveiled back in 1970. It singlehandedly created the upmarket SUV segment and ever since has seen plenty of pretenders to its throne, but few, if any, have managed to topple it.

The Range Rover tip toes between a hugely capable off-roader and a luxury cruiser. It's a vehicle that is as down and dirty in the mire as its ancient Defender great-granddaddy, yet every bit as prestigious, comfortable and luxurious as a Mercedes-Benz S-Class on Park Lane. More so, even. It’s got agility and performance that belie its ample bulk, especially in Supercharged 5.0-litre V8 form with its 5.4-second 0-62mph pace. In short, the Range Rover is one of the most complete cars money (a lot of it) can buy.

Price lists for the Range Rover include a Holland and Holland variant which features shotgun carrying equipment, or alternatively one fitted with 'event seating' so you can picnic without getting your feet dirty.

The rational buyer will opt for the diesel variants and they won't be disappointed, as both the 3.0-litre twin-turbo TDV6 and SDV6 Hybrid are equally as accomplished. But it's the range topping 5.0-litre Supercharged V8 which is the money no object choice. It offers scramjet levels of pace all the while lugging about a country house on wheels.

Given that the Range Rover is a better off-road vehicle than absolutely everything, even the people at Bentley have quietly admitted that to chase its off-road prowess with the forthcoming Bentayga is an exercise in futility. That the Range Rover can achieve this is nothing short of remarkable, as on road it comes with no real compromises. We’d be lying if we said it’ll pursue well-driven sports cars on the Route Napoleon, but it’ll hang onto their bumpers for longer than you’d believe possible. Land Rover’s engineers have found a way to cheat physics, up to a point, so the big Range Rover actually handles. The diesels have enough grunt to shorten the bits between the bends too, the 5.0-litre Supercharged V8 all but removing them.

If you had to choose just one car to do everything forever then the Range Rover would be impossible to argue against. It’s just so extraordinarily capable, its breadth of ability unsurpassed. Inside it’s as sumptuously appointed as any of its luxury saloon rivals, while Land Rover offers plentiful personalisation options and even a long-wheelbase version if you’d rather be driven. It's an automotive benchmark that everyone should experience at least once.

Performance and 0-60 time > A Range Rover Sport will charge to 62mph in just 5.1sec thanks to its supercharged 5.0-litre V8. Top speed is limited to 155mph. Read all about the Range Rover's performance here

Engine and gearbox > The top-of-the-line 5.0-litre V8 boasts 503bhp and 460lb ft of torque. The eight-speed paddleshift gearbox isn’t great for dealing with such torque, so select manual mode for better progress. Read all about the Range Rover's gearbox here

Interior and tech > The tech this car boasts is very impressive, and includes Land Rover’s famed Terrain Response programme, all manner of locking differentials, Hill Hold and a plethora of off-roading trickery. The luxurious interior is befitting of a vehicle at this price point, although the infotainment systems are noticeably ageing. Read all about the Range Rover's interior and tech here

Design > Land Rover has retained the Range Rover’s original design philosophy – we like it and it works well. The long-wheelbase Range Rover also looks the part. Read all about the Range Rover's design here