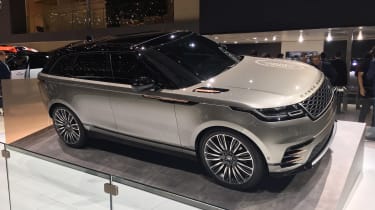 Land Rover has identified a ‘white space’ between the Range Rover Evoque and RR Sport and has decided to fill it with this, the Velar. A rival to Jaguar’s F-Pace and Porsche’s Macan and Cayenne it will be the company’s most on-road focussed model to date, but being a Range Rover it’s claimed to be more capable off road than any of its rivals, too.

Priced from £44,8300 and topping out at over £80,000, it covers every conceivable base currently occupied, not only by the F Pace, but rivals from Audi, BMW, Mercedes and Porsche to name a quartet.

Based on Jaguar’s IQ platform that underpins the F-Pace, the Velar’s body is predominately aluminium sitting on a chassis consisting of double-wishbone front suspension with an integral link set-up at the rear. Steel springs are standard on the smaller engined models, with air suspension fitted the further up the food chain you go. The dampers are also active.

There’s an eight-speed ZF gearbox mated to a range of petrol and diesel engines, two of which are six-cylinder units. The rest are all four-pots, including two variants of Jaguar Land Rover’s new Ingenium petrol engine. As you’d expect being a Solihull product the off road hardware is comprehensive. Featuring the same on-demand all-wheel-drive system as the F Pace, the Velar torque distribution is managed between front and rear axles by Land Rover’s IDD (Intelligent Driveline Dynamics), with six-cylinder engined models also be available with an active locking rear differential. Torque vectoring is standard across the range.

Land Rover’s configurable dynamics software will be standard on the First Edition launch models and optional on all other variants. It allows you to adjust throttle response and gear shift speeds, adjusts the dampers to a stiffer settings and the power-steering assistance is reduced to add more weight. The company’s Terrain Response system will be fitted to all Velar models, with the latest Terrain Response 2 standard on the First Edition models. This latest system has a fully automatic setting to simplify the driving modes further should you not be able to decide between Eco, Comfort, Grass-Gravel-Snow, Mud-Ruts, Sand and Dynamic mode (the latter is only available with Dynamic trim models). 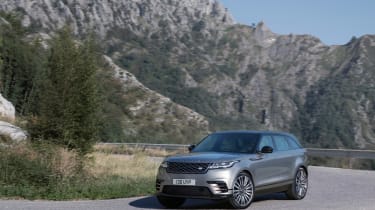 Performance figures range from a 5.3sec 0-60mph time for the supercharged ‘six to 8.4sec for the 178bhp diesel four, with maximum speeds ranging from 130mph for the latter and climbing to 155mph for the former. Range Rover claims fuel economy will range between 52.5mpg and 30.1mpg depending on the engine.

Externally the Velar takes many of its design cues from the current Range Rover Sport, but its lower overall height gives it a sleeker look, or as sleek as any car can look when it has a Gross Vehicle Weight of 2500kg. Matrix LED lights feature at both ends, wheel sizes range form 18 through to 22 and the flush-fit door handles resemble the units fitted to a Tesla. With a drag coefficient of 0.32 it’s the most aerodynamic Land Rover ever.

Inside is where the Velar moves the game on from existing Range Rover products. There is a pair of 10-inch high definition touchscreens positioned in the centre console separated by the dash bar and the lower screen flows into the centre console. Equipped with latest Touch Pro Duo infotainment system, the polycarbonate finish allows LR’s designers to integrate the screens with the car’s centre console allowing for the elimination of pretty much all buttons, with the two floating rotary dials controlling the infotainment, air con and Terrain Response System. The surface finish and how the screen’s touch ‘buttons’ operate are similar to those on the centre console in Porcshe’s new Panamera. 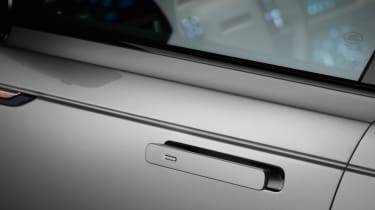 As Jaguar did with the F Pace, Range Rover has done with the Velar in terms in market positioning, with the new car sitting between Porsche’s Macan and Cayenne in terms of size and pricing and if the success of Range Rover products that have gone before it are anything to go by, expect the Velar to be as popular and successful as Porsche’s pair of SUVs when it goes on sale later in the summer of 2017.