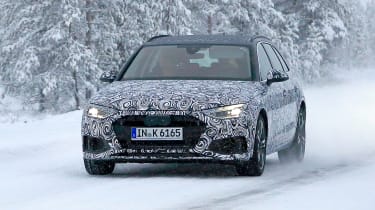 Audi announced a set of (very) subtle changes for its A4 compact executive car earlier this year, comprising a range of new colours and slight changes to the styling and powertrains. But the lack of a more substantial mid-life update came as a surprise considering the importance of the A4 for the brand. Now though, new images have surfaced of an A4 being tested with bigger changes, signalling that a full facelift is on the way after all.

The most obvious changes are the new headlights, with a softer and less angular shape framing a lower, wider grille. Behind the swirly tape, the headlight internals also have a more ornate set of LED elements, similar in style to those on the Audi A7.

From the rear, the A4 looks to have adopted some elements from the new A6 too, such as a horizontal bar connecting the rear lights and trapezoidal exhaust outlets. The changes, although subtle, should align the new A4 more closely with Marc Lichte’s latest design language that’s being spread around the rest of the Audi range, before an all-new model arrives some time after 2021. 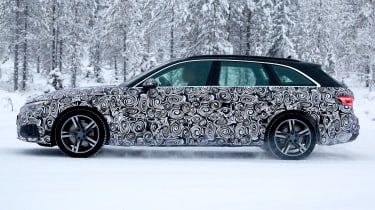 Inside, bigger questions remain, including whether Audi will change the current A4’s dashboard architecture for one able to support its latest infotainment system. As the car uses the same MLB Evo platform as the A6, it's likely we'll see that car’s interior tech. As Audi’s next generation of MMI infotainment systems are now built around a touch interface, the current A4’s high-mounted display won’t be particularly well suited to a touchscreen, bringing into question whether a whole new dash will be fitted. Although this is an unusually big change for a mid-life update, spy images of the facelifted Q7 have surfaced with that car featuring an all-new dashboard, borrowed from the Q8.

With an all-new BMW 3-series to worry about, not to mention Merc’s latest C-class, Volvo’s impressive new V60 and the Alfa Romeo Giulia, the A4 will need all the help it can get in the compact executive class.