The brand’s lightest and most powerful model yet, the Vuhl 05RR has made its first appearance in Mexico City 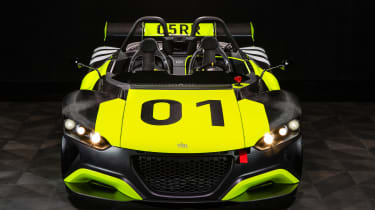 Six years after the original Vuhl 05 broke cover at the 2013 Goodwood Festival of Speed, the Mexican brand has given the model a revision, with even more power and even less weight to rival the Ariel Atom  and KTM X-Bow.

Now the lightest, most powerful model the brand makes, the 05RR racer sports improved mechanical grip and aerodynamic performance over its predecessor, as well as increased power and reduced weight. Alongside improved weight distribution, an impressive 50kg has been shaved off, bringing the kerb weight down to just 675kg. An increase of 100bhp to 385bhp and 59lb ft of torque to 369lb ft has also seen the power-to-weight ratio increase by 181bhp/ton to a total of 580bhp/ton. Steering and suspension systems have also been uprated to improve the car’s on-track prowess.

The standstill to 62mph sprint now comes in just 2.7sec, a second quicker than the original car thanks to a lightweight flywheel, lighter race clutch and full carbon wheels to reduce rotating mass. A lowered powertrain position has also made for a 50mm drop in the model’s centre of gravity. An upgrade over the Ford-sourced six-speed manual found in the standard car, the 05RR also sports a sequential paddleshift gearbox alongside a limited-slip differential and track-focused suspension and steering systems. Customers can also choose to spec track-specific suspension set-ups and slick tyres, should they desire. Vuhl claims the 05RR is capable of 1.8 G-force of lateral acceleration with this option ticked. 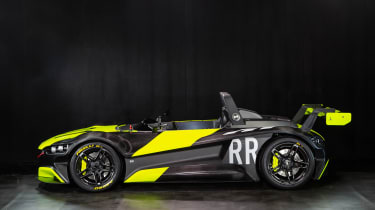 Tweaks don’t stop at performance, with various improvements to the interior aimed at giving the driver ‘the most engaging driving experience’. The exterior has also seen updates, with a large single-plane rear wing and carbon wheels adding to the aggression of the car.

The 05RR is now on sale worldwide with dealers in Europe, America and Mexico. Pricing details are yet to be announced, but expect it to exceed the £60,000 starting price of the original car.