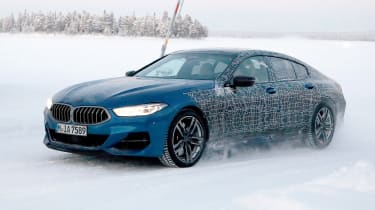 Following the reveal of its new 8-series Coupe and Convertible last year, BMW has been spotted testing a four-door Gran Coupe variant of its luxury GT. The car features a marginal increase in wheelbase over the 8-series Coupe to accommodate the extra set of doors and increase passenger space in the car’s rear quarters.

If it’s to follow the same blueprint as other Gran Coupe models from the brand, this latest 8-series model should offer an extra seat in the rear alongside more legroom, greater luggage capacity, a slight gain in weight over the coupe and the added practicality of that second pair of doors. Based on what we’ve seen previously, we don’t expect the overall size of the 8-series Gran Coupe to increase significantly despite the longer wheelbase. Weight distribution should also remain similar to the coupe’s, meaning handling characteristics shouldn’t take much of a hit.

A subtle rear ‘ducktail’ spoiler can be seen in these latest images, a design element likely added to help balance the side profile of the car with the added length and height at the rear. Inside, we expect the Gran Coupe to follow the same design as the coupe and convertible, with BMW’s new 12.3-inch driver display and smaller 10.25-inch screen in the centre of the dash fitted as standard. Aside from the obvious increase in wheelbase and addition of doors, however, very few other changes from the coupe can be seen. 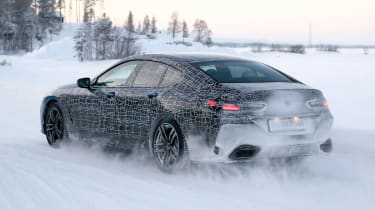 BMW has previously said that all 8-series variants will be offered with the same range of engines: the lesser 320bhp 3-litre six-cylinder 840d and the 530bhp 4.4-litre V8 M850i, both mated to an eight-speed automatic gearbox and four-wheel drive. As hinted at with the M8 Gran Coupe concept of last year, we also expect the marque to unveil a 600bhp-plus M-fettled M8 Gran Coupe at some stage. Such a model would feature a tuned version of the M850i’s 4.4-litre V8 to rival the new Mercedes-AMG GT 4-door and class-leading Porsche Panamera Turbo.

Although a launch date is yet to be confirmed, we expect to see the 8-series Gran Coupe surface at Geneva motor show this March.