Set to make its debut at the 2019 Geneva motor show, the Skoda Kamiq is the third and smallest SUV in the lineup 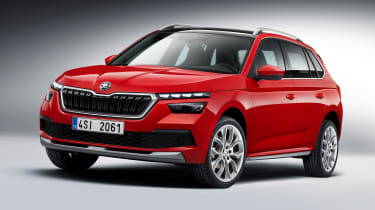 Following in the footsteps of the Karoq and Kodiaq, the all-new Kamiq has been unveiled as the smallest addition to Skoda’s new SUV range. It’s based on the MQB-A0 platform, one shared with the SEAT Arona and Volkswagen T-Cross, and features with 37mm of added ground clearance over the Skoda Scala to avoid those pesky inner-city kerbs.

As it’s based on the smaller MQB-A0, the Kamiq comes in front-wheel-drive only, making it a somewhat questionable choice for off-road use. Power comes from a choice of five engines, ranging from the entry-level 1.0-litre 3cyl petrol with 93bhp and 129ft lb of torque, to the top-spec 1.5-litre ‘evo’ four-cylinder producing 145bhp and 184ft lb of torque. The latter features active cylinder deactivation, allowing it to run on just two cylinders during light loads for fuel saving - combine this with the optional 7-speed DSG and it might prove to be a rather frugal choice, despite its higher power output.

Despite it small size and price, the Kamiq still sees many features found on its bigger SUV siblings, ranging from infotainment and safety systems, to Skoda’s latest design language. C shape rear lights and a split headlight design can still be seen on the Kamiq, for example, with additions such as dynamic front and rear indicators (a first for Skoda) and bespoke daytime running LEDs. To appeal to its younger target market, a large infotainment screen, virtual cockpit system and ambient lighting are all available on the options list. Front Assist for City Emergency Brake, Predictive Pedestrian Protection and Lane Assist are included as standard, however Adaptive Cruise Control and rear-view cameras are available at additional cost. 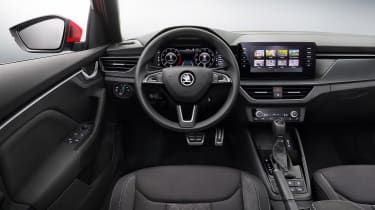 Three infotainment systems are available with a 10.25” Virtual Cockpit is also available as an option on higher specifications. To create a greater sense of space inside, the model’s air vents extend into the doors and ambient lighting in a choice of three colours is also an option. A heated steering wheel, windscreen, front seats and two outer rear seats are also all available - big-car features for a car in this segment.

In standard configuration, boot space comes in at a respectable 400-litres, and with the rear seats down this expands to 1395-litres. These numbers are marginally better than those you’ll find with the model’s rival, the Volkswagen T-Cross. UK prices and specifications are due to be revealed in May, with models reaching customers later in the year.