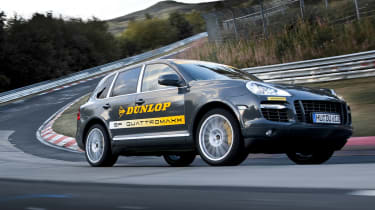 The never-ending contest for bragging rights at the Nürburgring has taken another step forward, with a new record time set.

Rather than the usual scrap between the Porsche 911 and Nissan GT-R or arguments over how much of a production car the Radical SR8LM actually is, this is a whole new tack on the usual Ring story – the Porsche Cayenne Turbo is the quickest SUV around the famed Nordschleife.

It was piloted round courtesy of Dunlop, the tyre company promoting its latest product, the SP Quattromaxx. It’s rubber designed especially for big SUVs, but the choice of launch location is evidence that off-road ability isn’t key in this class. Instead, the Quattromaxx is designed to maximise driver feedback and boost both wet and dry grip with a trick double tread compound.

A 493bhp, 2.3-ton Cayenne is one of the best cars to demonstrate the new rubber, a car with one of the biggest battles against physics, especially around the Ring. With Porsche Supercup racer Patrick Simon at the helm, a record lap was set on the first attempt – an 8min 35.5sec – but a couple more goes ensured an 8.33.99, a pretty tough time to beat, being just 17sec shy of the infinitely lighter and more nimble Renaultsport Mégane R26.R.

Keep your eyes on evo.co.uk, as we’ll have a video of the record soon. As a taster, see Michael Vergers' smashing the old record at the Ring in the Radical SR8