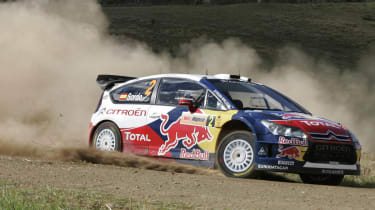 Kimi Raikkonen is off rallying next year. The former F1 world champion has been replaced by Fernando Alonso at Ferrari, leaving his 2010 looking quite sparse work-wise. He’s going to fill it with some WRC action, though, driving for Citroen’s junior team. ‘I always wanted to compete in rally, especially in the World Rally Championship at some point in my career,’ said Raikkonen. ‘Thanks to Red Bull, I have the opportunity to drive the best car of the series with the Citroen C4. This is a new but very exciting challenge’. He will use a C4 identical to that of reigning champion (and all round rallying hero) Sebastien Loeb. Raikkonen will drive in 12 of the 13 events in the WRC calendar (missing out New Zealand), but the big news is that his one-year deal with the Red Bull-backed team is that it’s strongly believed to lead to a seat in a Red Bull Racing F1 car in 2011. That could pave the way for Sebastian Vettel to go to Mercedes-Benz Motorsport, providing the reborn Brawn GP team has a good 2010…

Raikkonen's news comes the same day as Ferrari's F1 team principal has said Alonso will be a more suitable driver than the outgoing Finn. ‘In a car that is capable of winning, he [Raikkonen] was and is perfect,’ the Ferrari team principal, Stefano Domenicali said. ‘But if the car needs to be developed and the team fired up, Alonso is better.’