It's official: Michael Schumacher returns to Formula 1 with a drive at Brawn's Mercedes GP 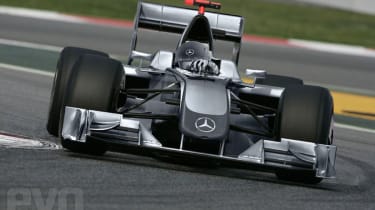 Michael Schumacher’s return to Formula 1 with Mercedes has been confirmed. The sport’s seven-times world champion has been the centre of rumours regarding a comeback since the 2009 season drew to a close and the drivers’ merry-go-round began to turn, with men moving in all directions. The current 2010 F1 grid is here. Schuey will be 41 when the 2010 Formula 1 season kicks off, but should be fighting fit – he claims the neck problems that halted his planned F1 comeback in the summer have disappeared. ‘After three years I have the energy back and I’m ready for some serious stuff’, he said. And his intention isn’t just to see out his career with old pal Ross Brawn: ‘Brawn is a team that won both championships last year, they now have a strong partner in Mercedes, so the only aim is to go for the championship’. An eighth title would certainly be something to shout about… Schumacher will reportedly earn £6.2million from a three-year deal with Mercedes, one which neatly bookends his F1 career, which began in 1991 at Jordan, a move paid for by Mercedes who the German began racing sports cars with. Schuey will be partnered by Nico Rosberg. Follow evo on Twitter or our Facebook page for car and F1 news