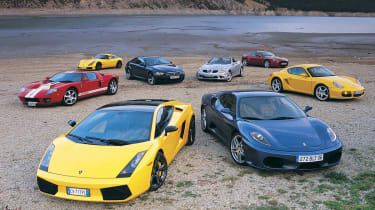 Today’s the turn of 2005. Peruse the performance cars below and get voting this way. The link takes you to the community, where if you scroll down to the bottom you’ll find the voting panel. Head to the Forum if you want to do more than click...

Ford GT (click the car names for content)The Ford GT supercar, on paper, isn’t completely evo. It would be easy to put it down as a retro re-hash and move on. But in fact it’s one of the best supercars of the decade; certainly among the most charismatic, and perhaps suprisingly one of the most nimble, too. ‘So smooth, so quick, such a supple chassis and a brilliant gearbox’, said Lord Metcalfe. ‘550bhp Elise’ was a term bandied about by others. And who can dislike a formula such as that… Ferrari F430A colossally impressive car, and one which you might understandably have put good money on to clinch eCoty 2005. It played second fiddle to the Ford, despite being the ‘sharpest and most agile’ car of the whole test, one more responsive than the car that beat it. ‘There’s an invigorating lightness to the F430 that the Gallardo and Ford GT simply don’t have. You don’t just flow with the road, you almost skim the surface. The whole car feels alert and whip-crack responsive.’ Renaultsport Clio 182 TrophyAnother year, another Clio sharing podium space with the super-doopercars. And more than deservedly so; it’s still impressing us four years later, doing incredibly well in our Greatest Drivers’ Cars Ever shootout. John Barker – ‘it sets a pace you wouldn’t believe possible if there wasn’t something very fast to reference it against. It’s incredible.’ Lamborghini Gallardo SEIn the trail of Gallardos produced since the Baby Lambo’s introduction in 2003, the SE is perhaps the most forgotten among Superleggeras, Balbonis and Spyders. Unjustly so, as it was a real favourite at eCoty, and unfairly out of 2005’s top three in some eyes. Roger Green – ‘It’s a full-on racer, urging you to drive it flat-out. Everything’s that bit finer and more aggressive than the original car. It’s a mega thing.’ BMW M3 CSHeld in higher regard at Evo Towers than the M3 CSL, you may be surprised to learn. ‘Never fails to deliver moments of pure rear-drive satisfaction’, said Mr Barker. ‘It’s exactly what you wanted the M3 to be from the start’ said Lord M, ‘great throttle response and that magical diff, coupled to more detailed steering feel. The best bit is it hasn’t needed to go GT3-stiff to make blinding progress’. BMW’s M Division at its very best.

So, they’re your contenders for 2005. Click here to vote for your favourite and use the eCotd Forum thread to air your opinions or tell us about cars that should be here. And don’t forget to come back on Monday for the best of 2006…   Follow evo on Twitter or join our Facebook page