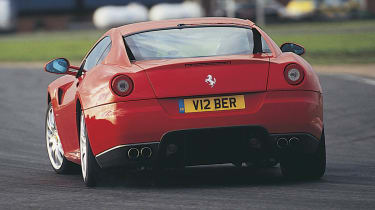 Today’s the turn of 2006. Peruse the performance cars below and get voting this way. The link takes you to the community, where if you scroll down to the bottom you’ll find the voting panel. Head to the Forum if you want to do more than click…

Ferrari 599 GTB (click car names for content)Until you’ve driven a 599, it’s all too easy to dismiss it as a long-haul GT machine, an impression the long bonnet and upmarket air does nothing to discourage. Nor does its ability to loaf across continents. But get it on what you’d imagine to be the wrong road and the 599 shows its true colours – as one of the most capable, dynamic and perfectly balanced cars ever to emerge from Maranello. As Peter Tomalin comments, ‘it really is poised, it feels like the car is 100 per cent under you’. Porsche 997 GT3No win for Porsche’s mighty GT3 in 2006, but it wasn’t far adrift in the final reckoning – less than one percentage point separated the top two. ‘It’s a lovely driving machine, a perfect Porsche’, said Harry Metcalfe, echoing the views of all the judges assembled in the Gorges du Verdon in Southern France. A little extra give in the chassis from the 996 does nothing to take the edge off the GT3’s dynamics – it remains a precision instrument.  Lamborghini Murcielago LP640‘As close to sacred as anything made by human hand’. Dickie Meaden’s comment on the Lamborghini V12 rings true – once sampled, this engine is never forgotten. Does it overshadow the rest of the car? Partly, yes, but the LP640, although not as nimble as the 599 in the tight stuff, still earned itself a top-three finish. Lighter, more nimble and more pointy than previous Murcielagos, the LP640 is more driveable than you might expect.  Corvette Z06Welcome to the surprise package of 2006. Finally, in Z06 guise, the Corvette proved that it could be a contender. ‘It’s just what you want from a massively powerful rear-wheel-drive car, really’ said Jethro Bovingdon. The 7-litre, 505bhp V8 sounds utterly magnificent and delivers vast straight-line urge. But what’s new here is that it all hangs together in the corners. A cut-price 599 GTB. Lotus Elise SThe odd one out amongst the big guns around it, the Elise does what it does best: scythe through corners and place driver interaction at the top of the agenda. It won round one in North Wales, beating 11 cars in the process and then set about proving that money and bold bodywork is no barrier to handling talent. ‘The sustained composure and precision of the little Lotus is something to marvel at’ said Peter Tomalin. Quite.

So, they’re your contenders for 2006. Click here to vote for your favourite and use the eCotd Forum thread to air your opinions or tell us about cars that should be here. And don’t forget to come back tomorrow for the best of 2007… Follow evo on Twitter or join our Facebook page