evo Car of the Decade: Result

The official Car of the Decade result, your favourite performance car and ours 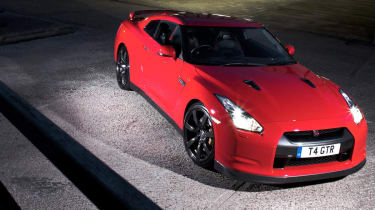 So, the votes have been counted. After a week (and a bit) of voting on what you consider to be the best, most desirable and most important car of the last ten years, you’ve picked…. The Nissan GT-R. A wise choice, and one we’d not disagree with. The way it’s advanced the performance car game and its ability to demolish cars two or three times its price is nothing short of astonishing. Sadly, though, there’s reason to believe the vote was swung in the Nissan’s favour (and the second-place Vauxhall VX220’s) by a brace of enthusiastic owners’ forums. The rest of the contenders were left languishing as the Japanese giant and the Griffin-badged sports car battled it out in a distinctly two-horse race. So to restore the balance (vaguely) we had a straw poll round the office to pick our winner, with ten of evo’s top scribblers picking their favourite from the final ten cars (view them here) to determine the office winner. Chris Harris agrees with the Nissan GT-R, while Richard Porter and Ollie Marriage both shouted for the Lamborghini Murcielago SV. ‘Because it’s daft, because it’s unashamed; because it’s glorious, because it has the best engine ever, because of the way it looks, because it drives better than it has any right to’, said Ollie. ‘It may be the last of the truly nutty big Lamborghinis. As such, it'll become something that will cause us to look back on the 2000s with dewy eyed fondness’ reckons Porter. Neither the GT-R or LP670-4 can hold off the inevitable landslide from one car though. Yep, it’s the Porsche 911 GT3 RS, aka Kermit, our eCoty 2007 winner. Richard Meaden – ‘even by my partisan standards the 997 GT3 RS has left a lasting impression. I had some of my best drives ever in the green monster during 2007, both on road and track. Like the rest of the world, I'm in awe of the GT-R, and the LP670 SV defines the word 'supercar' more completely than anything since the F40, but of all the cars I was jammy enough to drive throughout the Noughties the RS was - and remains - the closest to my idea of the perfect modern drivers' car.’ Ian Eveleigh – ‘GT3 RS. Because if you bought any other car on the list you just know that one day you’d be driving it and you’d find yourself thinking, ‘I’d enjoy this road a lot more in a GT3 RS...’ Even if you had a VX220.’ New ed Nick Trott – ‘the car I most desire among these is the GT3 RS. It’s not the best (GT-R), nor is it the most impressive achievement (again, GT-R) but of all the cars in this list it’s the one I’d  I’d tip my last gallon of fuel into.’ And the last word goes to oversteer-meister John Barker – ‘the 997 GT3 RS would be my everyday, never sell it, from here to eternity choice. The best 911 I've ever driven; perfectly imperfect.’ What are your thoughts? Happy or sad, head to the Car of the Decade forum and tell all. Follow evo on Twitter or Facebook for latest car news and views