Full technical details of the British LSR challenger have been revealed. So how big's the turning circle? 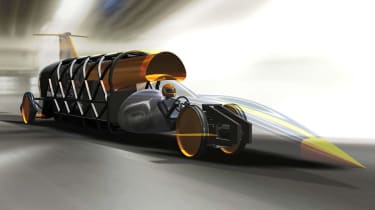 Imagine if McLaren told you everything there was to know about its F1 car, or Red Bull’s Adrian Newey took you aside and detailed all his aerodynamic tricks or if Ferrari invited you to have copies of its CAD files. Unthinkable. Bloodhound isn’t a secret project – in fact the plan is to be as open as possible, the aim being to showing students how exciting science and engineering can be. As chief engineer Mark Chapman told us, ‘a key aspect of the Bloodhound mission is to share the adventure – and all the data’. Which is why the team has just released all the technical details for the land speed record car. And we do mean all of them – the document is 43 pages long. OK, so much of it is utterly baffling (it’ll be even worse when they release the CAD data this autumn), but some figures are rather compelling. Here are some highlights.

At 1000mph these will be rotating at 10304rpm – that’s over 170 times per second and each one weighs 149.3kg. Chapman told us they’re going to be spun tested soon – at the same place that tests main turbine bearings for power stations… Jet Engine

More efficient than you might think, the 1000kg EJ200 chomping through 1.3kg of fuel per second while delivering 60,000 newtons of thrust. Lighting the afterburner spoils things slightly as consumption more than trebles to 4.3kg per second. On the plus side it does deliver another 30,000 newtons.

Bloodhound weighs 6422kg, or 4738kg without fluids and driver. We even know how much Andy Green weighs – 92kg with all his kit. Everything is broken down – the parachutes weigh 90kg, the fin that carries all the sponsors names is 75kg etc.

The drag factor is around 1.2Cd depending on speed – against a good family saloon at around 0.3Cd.