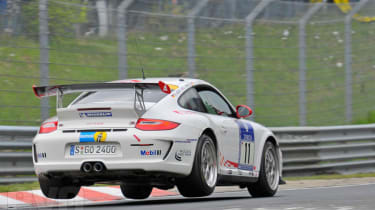 The build up to the 2011 Nurburgring 24 hour race this weekend is gathering pace with Mini announcing that a racing version of the new Mini Coupe will be at the ‘Ring this weekend.

Aston Martin and Volkswagen have already confirmed that red-hot versions of their road cars will be taking part in the race. The Mini Coupe JCW will make its debut in the 24 hour race is a teaser for the showroom version that will be coming out this autumn.

Mini says the Coupe’s 1.6-litre four-cylinder turbocharged engine has been reworked to deliver 250bhp along with 243lb ft peak torque available via an over boost function. With just 965kg to push around, the race car should be easily capable of the claimed top speed of 240 km/h.

Top tier teams from BMW, Porsche, Audi, Ferrari and Mercedes-Benz will fight for class and overall honours around the 24-hour circuit which mates sections of the grand prix circuit and the mighty Nordschleife (northern loop) of the Nurburgring.

Evo will be fielding a trio of drivers for the event with John Barker driving an Audi R8 LMS GT3 in class SP 9 GT3, Richard Meaden in Aston Martin’s incredible V12 Zagato in SP 8 and Chris Harris at the wheel of a Porsche GT3 Cup car in SP 7.

Running in difference classes should negate the possibility of spilled tea and harsh words in the office, there are no evo team orders and all will be racing hard for bragging rights and - if all goes well - perhaps even some silverware.

As always the international nature of the event sees the field chock-full of interesting cars and high profile professional and amateur drivers including Carlos Sainz in a Volkswagen Scirocco, Andy Priaulx piloting the experimental class BMW M3 GT and Kazunori Yamauchi, the creator of the Gran Turismo game series, in a Nissan GT-R after a credible 4th in class at last year’s race behind the wheel of a Lexus IS-F.

The grid this year is limited to 250 entrants and features a staggered start to prevent congestion. In 2010’s race, 199 started and 123 finished, evo’s Roger Green one of those who failed to cross the line after a dramatic fire destroyed his Lotus Exige.