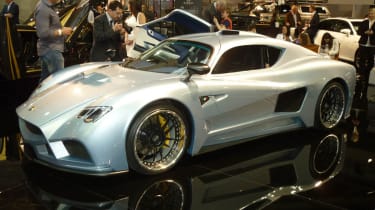 The 2013 Top Marques show in Monaco has yielded a new Italian supercar. The mid-engine, rear-drive Mazzanti Evantra will be super exclusive – with plans to build five each year – and comes with a price tag to suit.  It’s completely handmade, with a choice of an aluminium or carbonfibre bodies. The latter is cheaper – and at eight months, the option with the shortest construction time – and is likely to be favoured by most customers. The styling is dominated by bold, rear-hinged doors and large 20in alloy wheels. At the Evantra’s heart is the LS7 7-litre V8 engine from the Corvette Z06, but with the wick turned up to 691bhp, representing a near-200bhp hike. That makes it one of the most powerful naturally aspirated production cars on sale. Torque is rated at 625lb ft and with a 1300kg kerb weight to shift, that’s good for a 3.2sec 0-62 time, keeping up pace with the Ferrari 458 and Pagani Huayra. The stock Evantra uses a six-speed manual gearbox, though a paddle-shift sequential setup is optional. The engine is mid-mounted, though as you can see from the picture, right, it allows more luggage space than many rivals. Company owner Luca Mazzanti told evo that the suspension and chassis components are brand new, with his team boasting backgrounds in Formula 1, Audi’s Le Mans team and Ferrari, which is based relatively close to Mazzanti’s factory near Pisa. Prices start at 650,000 euros plus VAT – around £665,000, more than the cost of buying a Ferrari 458 Italia, FF and F12 Berlinetta in the same order. Most customers are expected to live in the Far East.