We interview Audi racer Allan McNish ahead of the 2013 Le Mans 24 hours. Who's is racing hero, and what's it like coming from Formula 1? 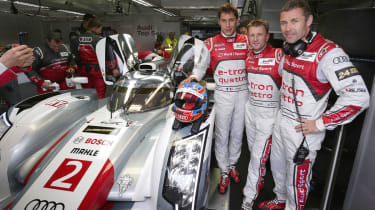 Allan McNish is the Scottish two-time Le Mans winner, racing again for Audi in 2013 and aiming for his hat-trick and a move up the all-time winners’ rankings. We speak to him ahead of the race on June 22, asking about his racing heroes, his favourite racing cars, and what the step from F1 to Le Mans is like… You have raced in both Formula 1 and Le Mans. This year a number of F1 drives – Senna, Kobayashi – have made the move. What is the step from F1 to LM like?  There are two step changes – F1 to LMP1, and F1 to GT. I know I would prefer to step into an LMP1 car which has more downforce and tyre grip than an F1 car; technology-wise it’s equal and above to F1, and has a similar driving style. A GT car is a completely different environment – I think there is a very big culture difference. Without question the number of F1 drivers coming into sports car racing in the last five or so years has been very high. I think if you’re in F1, unless you’re in one of three particular cars, it’s very difficult to have a chance, and it’s hard financially too. There’s really good racing that’s very much centred around the performance not the politics, and that’s away from the F1 paddock. Who was your racing hero?  Giacomo Agostini. When I was a kid coming from Dumfries, it was four hours in a wee fishing boat to get to the Isle of Man. My family used to go to every TT week and I grew up hearing stories of Agostini down Ramsey and Creg-ny-baa. I remember thinking ‘this guy is the man’.

On the car side of things, it’s David Leslie [the late BTCC and Le Mans driver] because he was from Dumfries. He was starting car racing when I was six or seven and I always followed what he was doing, he was a local hero of sorts. If you could drive any Le Mans car from past, which would it be?  I think I’ve already done it - the old Porsche 962. It’s not because of the car. I’m not a big one for looking back in history, but when I started in Le Mans there was a guy called Norbert Singer designing the Porsches, and he basically gave me so much education in sports car racing. It was more of a case of driving his car than driving a particular type of car. It was typical Singer – understeered quite a lot, very consistent balance and it had the certain characteristics of a car that would be easy to drive over 24 hours. I phoned him afterwards and it ended up a full-on debrief as if I’d just done a race! It was really quite cool. To me it’s more the people behind the car rather than the car itself. I’m very lucky, though, I’ve been able to sit in and race a lot of the legendary Le Mans cars.