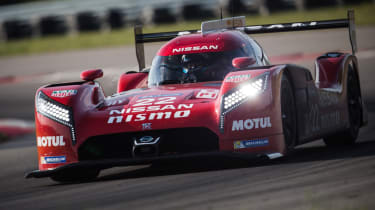 Nissan has today announced it will delay its return to the World Endurance Championship as it seeks to address technical issues with the innovative GT-R LM Nismo race car.

The car faced its first competitive outing at Le Mans back in June, but struggled throughout the race thanks to the car’s relative lack of development and unforeseen issues during the race.

Among those problems were a non-functioning energy recovery system – which limited both the front-wheel drive car’s traction and stymied its full power output – and suspension issues which required the team to stay off the kerbs during the race, losing further time.

evo spoke to Darren Cox, Nismo’s global head of brand, marketing and sales, back in June. Back then, Cox told us the team was committed to seeing out the rest of the WEC season. ‘We’ve always talked about being partners of the championship,’ Cox said, ‘and not just competitors’.

Cox also noted that the team would develop next year’s Le Mans car as a parallel program to the WEC events, though Nissan’s latest decision suggests all efforts will now be concentrated on ensuring the car is competitive next year.

The firm originally committed to a two-year program, in the knowledge that WEC regulations change in 2017 and may not favour the team’s engineering approach.

That doesn’t seem to have changed, though Nissan hasn’t yet divulged when it will return to the WEC, short of another shot at Le Mans itself next year. The majority of the team’s testing will be carried out in the United States.

‘We are racers and we want to compete but we also want to be competitive.  That is why we have chosen to continue our test programme and prepare the GT-R LM NISMO for the strong competition we face in the World Endurance Championship’ said Shoichi Miyatani, President of NISMO in a statement.

‘When you innovate you don’t give up at the first hurdle. We are committed to overcoming this challenge.’

You can read our recent interview with Darren Cox here.