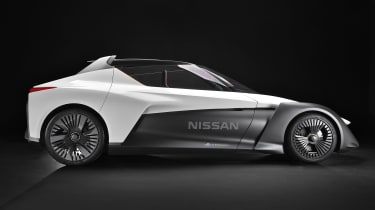 Back in 2013 Nissan unveiled a concept called the BladeGlider. Today, the BladeGilder is back, at least in prototype form, making an appearance in Rio de Janeiro.

Inspired by the firm’s efforts in Le Mans with cars like the Deltawing and ZEOD RC, the BladeGlider is a delta-shaped four-wheeled sports car with an electric powertrain.

Nissan’s partner on the BladeGlider project, Williams Advanced Engineering, developed the drivetrain. It uses an electric motor for each rear wheel, developing 130kW each – equivalent to 174bhp per wheel – while energy comes from a 220kW lithium-ion battery pack.

That’s the battery’s output, of course – the battery’s capacity (typically measured in kilowatt-hours, rather than kilowatts) is unconfirmed, and no range or recharging time figures are quoted.

There’s enough juice to punch the 1300kg BladeGlider to an estimated sub-5-second 0-62mph time, while top speed is quoted as ‘in excess of 118mph’.

Due to the dual-motor setup, the BladeGilder’s drivetrain offers a torque vectoring function, adjusting power to each wheel as required to optimise the car’s handling characteristics. Those can be adjusted by the driver too, by either turning the system off entirely or by switching it to ‘agile’ and ‘drift’ modes. 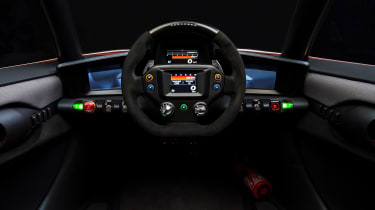 Thanks to the BladeGlider’s unusual exterior form, its interior is equally odd. We’ve certainly seen the driver and passenger seating layout before – it’s identical to the McLaren F1 supercar – and those passengers enter through rear-hinged dihedral doors. There’s a full rollover structure in the roof, clearly inspired by that of the ZEOD race car.

Many of the car’s controls are located on the steering wheel, which sits in front of a central display and features rear-view video screens to either side – fed by exterior cameras, for a more aerodynamic option than traditional mirrors.

Nissan president Carlos Ghosn describes it as an ‘electric vehicle for car-lovers’ – something its volume production Leaf hasn’t quite achieved – and sees it as a real-life study into the potential of advanced electric vehicle performance.

Two have been created so far, both of which will debut in Rio – one on static display, and one ferrying media and VIPs over the period of the games. Production, however, is something of a long shot.